'Turkey may send contractors to Cuba this year' 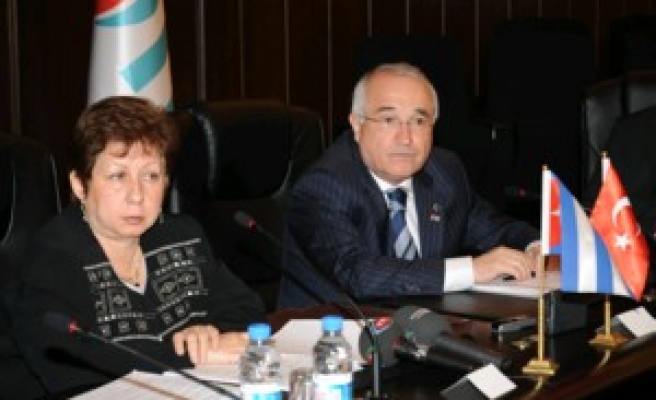 "Turkey attaches particular importance to Cuba as a part of its strategy to open to Latin America and Caribbeans," Cicek told participants of the Eighth Term Meeting of Turkish-Cuban Joint Economic Committee (JEC) in capital Ankara.

Cicek welcomed the rise in trade volume between Turkey and Cuba to 34 billion USD in 2007, and said there are many cooperation opportunities between the two countries.

"However, we have to speed up bureaucratic procedures and diversify projects," he told.

On the other hand, Marta Lomas Morales, Cuban Minister for Foreign Investments and Economic Cooperation, said 41 of 234 foreign companies operated in industry and agriculture in Cuba last year.

Morales said 54 percent of those companies were of Spanish, Canadian and Italian origin.

A loan of 10 million euros lent by Turkey to Cuba through Eximbank was used in renovation of dams, and irrigation and electricity works, Morales said.

Morales said there was no problem in repayment of the loan, and said she believes there is political will in both countries to sign a contract for another tranche of loan worth 15 million euros.

The Cuban minister is scheduled to meet Erdogan Bayraktar, head of the Housing Development Administration of Turkey (TOKI), and Erdal Eren, head of the Turkish Contractors' Association, as well as several ministers.

Morales will also meet Nusret Aras, president of the Ankara University, within the scope of a cooperation protocol this university signed with Havana University.

The JEC meetings will end on Wednesday, whereas Turkish state-run Turkish Radio & Television Corporation (TRT) and Cuban radio and TV corporation are expected to sign a cooperation protocol.

Other two institutions that will sign a cooperation agreement are Turkish National Library and the Cuban national library.

Turkey and Cuba actually have a trade volume of 34 million USD. Imports from Cuba constitute 1.5 million USD of this volume while the rest is Turkish exports to this country.

Turkey imports alcohol used in medicine industry, nickel and tobacco from Cuba, and it exports materials used in electricity and infrastructural works within the scope of the 10 million euro loan.