Erdogan said, "nobody should expect Turkish Cypriots to step back from the idea of self-administration, equal status and equal partnership and to accept living as a minority group". 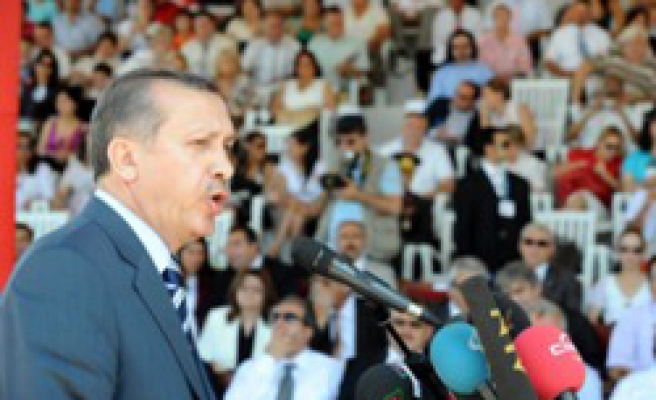 Turkish prime minister said on Sunday that a comprehensive solution could be found in Cyprus provided that such solution was based on the realities in the island.

Prime Minister Recep Tayyip Erdogan attended a ceremony held on the occasion of the 34th anniversary of the "Peace and Freedom Operation" conducted in Cyprus in 1974.

Erdogan said that making Turkish Cypriots pay the price for the uncompromising stance of Greek Cypriots was a serious contradiction and a great injustice.

Speaking at the ceremony, Erdogan said, "it is not legitimate to impose restrictions on the party that desires peace and compromise".

Commenting on the recent meeting between Turkish and Greek Cypriot leaders, Erdogan said the leaders' reaching a consensus on certain matters during such meeting was a positive step.

Erdogan said that in return for the Turkish Cypriot party's constructive approach, Greek Cypriots should now give up changing the agenda and accept that a solution could be achieved by establishing a new partnership between two equal nations.

"We do not and will not accept the continuation of the isolations imposed on Turkish Cypriots," Erdogan said.

"The international community, and primarily EU, should keep its promises to Turkish Cypriots," he added.

Erdogan said that it was not right to relate Turkey's EU membership with the Cyprus issue. "Cyprus issue should not be used against Turkey's EU accession process," he said.

Erdogan said, "nobody should expect Turkish Cypriots to step back from the idea of self-administration, equal status and equal partnership and to accept living as a minority group".

Erdogan said that a comprehensive solution could only be achieved with a new partnership in which Turkish Cypriot people and TRNC would participate equally and as a founder element.

"Such new partnership will be established on the principles of bizonal structure, political equality and Turkey's effective status as guarantor state," he said.

Erdogan also said that the "Cyprus Peace Operation" prevented a massacre to be committed against Turkish Cypriots.

"It was a humanistic operation which had no intention other than bringing peace to the island. Everybody should perceive this reality and evaluate history from such perspective," Erdogan said.

"The peace operation, which was waged by Turkish Armed Forces depending on international law and agreements, brought freedom, confidence and prosperity to Turkish Cypriots," he also said.

Turkey's president sent on Sunday a message to his Turkish Cypriot counterpart to celebrate his Peace and Freedom Day.

Turkish President Abdullah Gul sent the message to President Mehmet Ali Talat of Turkish Republic of Northern Cyprus (TRNC) on the 34th anniversary of the Peace and Freedom Day, his office said.

"There are two politically-equal nations, democracies and states in Cyprus, Gul said in his message.

Gul said that peace and tranquility could be secured in Cyprus only by a solution based on facts in the island.

"Turkey, as a guarantor state, backs the target to establish a new partnership in Cyprus," Gul also said.