'Turkey ready to open talks with EU on 5-6 chapters': FM

Turkish FM said, "this is the first time today that chapter headings, which have accession criteria, were opened after those criteria were met." 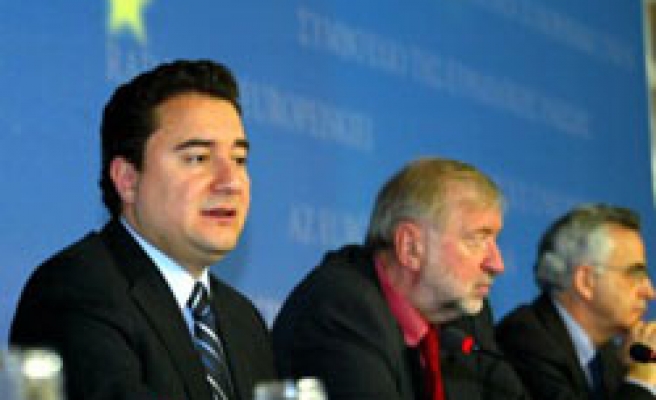 Turkish FM & Chief Negotiator for the EU talks Ali Babacan said on Tuesday that Turkey was ready to open talks with the EU on 5-6 chapter headings.

Speaking at a news conference after the Intergovernmental Conference in Luxembourg, Babacan said Turkey expected membership talks to be maintained by taking into consideration the technical preparations in related chapter headings.

"Unfortunately, we have seen that this is not so," he said.

Babacan said reforms within the scope of the two chapter headings opened on Tuesday would make an important contribution to improvement of investment environment in Turkey.

"Turkey will continue to implement the reforms whether chapter headings are opened with the EU or not," Babacan also noted.

Turkish FM said, "this is the first time today that chapter headings, which have accession criteria, were opened after those criteria were met."

Babacan said EU member countries continued to discuss 4 chapter headings that the European Commission did not envisage accession criteria in its reports.

Babacan also said member countries asked for position paper from Turkey on chapter headings such as "education and culture" and "economic and monetary policy", which don't require accession criteria.

FM Babacan said Turkey expected France, next rotating president of the EU, to abide by its commitments that negotiations would follow their normal course in the second half of 2008.

Turkey opened negotiations with the EU on "company law" and "intellectual property law" during the 5th Intergovernmental Conference on Tuesday.

Turkey launched accession talks with the EU on October 3rd, 2005.

EU accession talks started on October 3rd, 2005 with screening process. Turkey temporarily opened and closed chapter heading on "science and research" during the rotating presidency of Austria in the first half of 2006.

Turkey launched negotiations on three chapter headings -- "enterprise and industrial policy, "statistics" and "financial control" in the first half of 2007 during the rotating presidency of Germany.

Portugal, who took over the EU rotating presidency from Germany in the second half of 2007, opened negotiations with Turkey on two chapter headings, "consumer and health protection" and "trans-European networks".

EU froze talks in 8 of the 35 chapter headings with Turkey in 2006 on charges that Turkey did not meet obligations of the Additional Protocol.

EU sources expects talks on "free movement of capital" and "taxation" during the rotating presidency of France in the second half of the year.