Turkey and Qatar will build facilities in Ceyhan, the southern Anatolian energy hub on the Mediterranean Coast, to sell Qatari natural gas to European markets. Also, the Turkish Petroleum Corporation (TPAO) plans to submit a bid for exploring natural gas 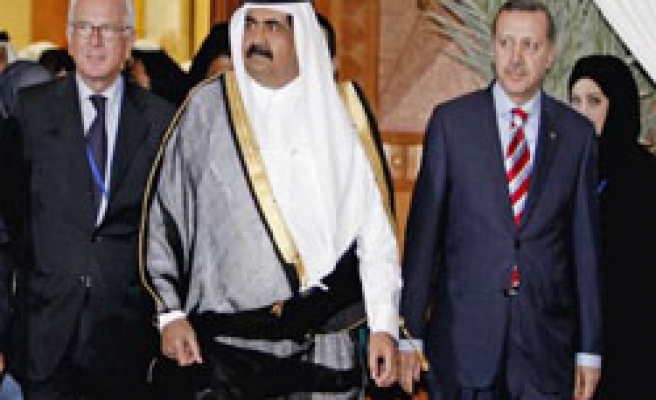 Amid problems with ongoing natural gas supply interruptions and expected future energy shortfalls, the Turkish government has accelerated its efforts to diversify its energy supply on the occasion of a visit by Prime Minister Recep Tayyip Erdoğan to natural gas-rich Qatar, Today's Zaman reported.

Erdoğan arrived in the Gulf state on Sunday for a three-day official visit at the invitation of Qatar's Emir Sheikh Hamad bin Khalifa al-Thani. On the first day of his visit, the prime minister attended the Doha Forum on Democracy, Development and Free Trade and delivered a speech there.

Erdoğan also held talks yesterday with Qatari Prime Minister and Foreign Minister Sheikh Hamad bin Jassem bin Jabor al-Thani, as well as with the emir.Accompanied by Energy Minister Hilmi Güler, Erdoğan is scheduled to hold a meeting with Qatar's Deputy Prime Minister and Minister of Energy and Industry Abdullah bin Hamad Al-Attiyah during which the two sides are expected to further develop Turkish plans to start buying liquefied natural gas (LNG) from the Gulf country as of 2011.

According to those plans, Turkey and Qatar will build facilities in Ceyhan, the southern Anatolian energy hub on the Mediterranean Coast, to sell Qatari natural gas to European markets. Also, the Turkish Petroleum Corporation (TPAO) plans to submit a bid for exploring natural gas in the Qatari territorial waters of the Persian Gulf.

Turkey relies heavily on Russia and Iran for natural gas, but it was recently reminded once again of the dire necessity of diversifying its supplies. In early January, Iran halted the gas flow to Turkey six days after reducing the amount of gas it exports to Turkey. The halt came amid a cold snap that peaked domestic consumption and led to the termination of gas deliveries from Turkmenistan to Iran. In January 2007, as well, Iran cut gas supplies to Turkey to compensate for a similar domestic increase in consumption.

Revenues from oil and natural gas exports are feeding an economic boom in Qatar. The small emirate's economy is estimated to have grown nearly 18 percent in 2007. Projections for 2008 show that the growth rate will continue at a similar pace. This economic growth has meant an increase in investment budget; the country is expected to plough billions of dollars into energy and industry projects in the coming years.

These investments will help Qatar to stop relying solely on oil and gas exports to sustain its growth. Authorities are planning to improve the transportation sector as part of this policy and Turkish companies are highly interested in business opportunities there. Turkish-led consortium TAV, which built two of Turkey's largest airports, is involved in the construction of a new international airport in Doha that will be able to serve 50 million passengers annually when completed. TAV, in cooperation with a Japanese company, is building the airport's terminal building in a $2.5 billion project.

In the past five years more than 25 Turkish construction companies have undertaken projects worth a total of $5 billion in Qatar.

In his speech at the Doha Forum, Erdoğan stressed the need for a firm stance against global polarization, which has become stronger in the aftermath of the Sept. 11 attacks in the US.

In an apparent reference to the UN-led Alliance of Civilizations initiative co-sponsored by Spain and Turkey, Erdoğan told the international gathering: "Turkey has exerted efforts toward constituting an antithesis to the thesis of a 'clash of civilizations' at a time when Islamophobia has become widespread -- when it has even turned into paranoia in some countries."

Some theorists argue that cultural and religious identity have emerged as the main source of tension following the Cold War and the assumption that religion is the root of most conflicts has multiplied since the Sept. 11 attacks. One of the most prominent champions of this latter theory is Samuel Huntington, author of the 1996 book titled "The Clash of Civilizations and the Remaking of World Order."