Gul met with Turkish ambassadors, currently in Turkey within the scope of "1st Ambassadors Conference", over lunch at the Presidential Palace in Ankara. 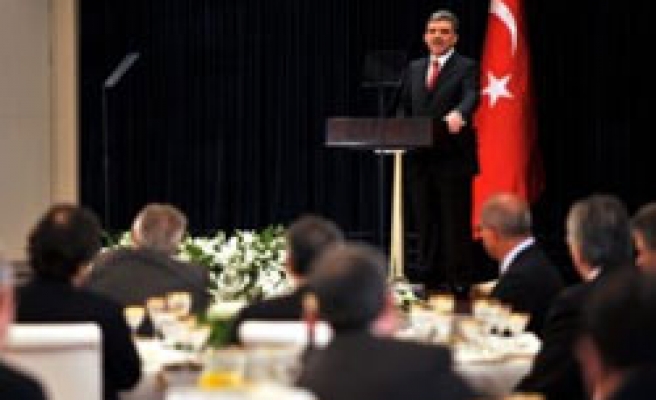 Turkish President Abdullah Gul said on Friday that modernization project of Turkey as regards to European Union (EU) membership should be one of the priorities of Turkish diplomacy and other state institutions.

Gul met with Turkish ambassadors, currently in Turkey within the scope of "1st Ambassadors Conference", over lunch at the Presidential Palace in Ankara.

Gul said Turkish Republic strengthened its security, national unity and integrity, upgraded its prosperity level and reached its goal to become a "positive power" for peace and stability in its region.

Gul said Turkey launched initiatives on many regional problems including the Middle East, assumed roles in multinational peace protection forces, and played a significant role in peace and cooperation activities in the world.

Turkish President said political, economic and cultural clashes in the Middle East region deeply affected global peace and stability, noting that the efforts exerted for the solution of the problems in question could not yield results.

"We see that the actual situation was only in the interests of fanatics, terrorists and speculators, so I think that mechanisms should be established soon to prevent crises and to restore a new confidence and cooperation atmosphere in the Middle East," he added.

President Gul said careful works and creative ideas of the ambassadors contributed a lot for the solution of some problems, noting that U.N. plan regarding Cyprus question was negotiated successfully.

Gul said Turkey launched many good-will initiatives to normalize relations with Armenia since this country announced its independence, adding "the initiatives in question and proposal of Turkey to establish a "joint history commission" waits for response."

Commenting on relations with the EU, Gul said Turkey made important steps on fundamental principles of democratic, secular and social state for the past 85 years on the way to reach level of contemporary civilization. "Full membership talks with the EU is the most important phase of this," he added.

"Fundamental principles of the EU are based on democracy, supremacy of law, protection of human rights, recognition of social rights, free market economy, cultural diversity and respect. The values in question are in conformity with the philosophy of our Republic and expectations of our people. Thus, this project should be one of the most important priorities of our diplomacy and other state institutions," he added.