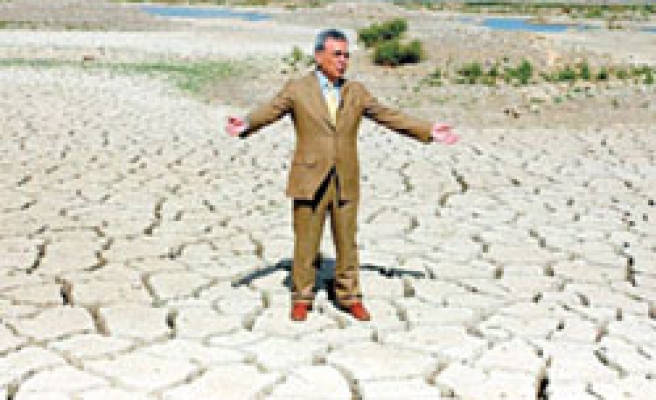 Two of Turkey's biggest cities have tap water containing arsenic in excess of legal limits, while water levels in the biggest city's reservoirs have fallen alarmingly low. The problem could grow to unmanageable proportions if long-term water management policies are not developed, experts warn.

Faced with climate change and associated problems, the world's nations are developing new strategies and water policies to adapt to the challenges ahead. However the three largest cities in the nation, which has yet to develop a long-term water management policy, are struggling with problems related to toxicity and supply of this increasingly scarce, precious resource.

Some of the most recent discussions began after an investment by the Greater Ankara Municipality to pump water to the city from the Kızılırmak River last month. The discussion changed course, however, with allegations that water transferred to supplement the city's drinking water supply contained unsafe levels of arsenic. Recep Akdağ, Turkey's health minister, had to get involved in the ensuing debate. He released a statement in mid-June saying all the results from water analyses in Kızılırmak complied with health standards. "We collect more than 600 samples every single day from various points in Ankara for analysis, and not a single sample to date has yielded a result outside the norm," Akdağ said in a statement on June 13.

The World Health Organization includes among the risks posed by excess long-term exposure to arsenic (arsenicosis): "skin cancer, cancers of the bladder, kidney and lung, diseases of the blood vessels of the legs and feet, and possibly also diabetes, high blood pressure and reproductive disorders."

The discussion took yet another aspect when Ankara Mayor Melih Gökçek diverted attention to İzmir by announcing that the level of arsenic in Ankara's drinking water was 0.01 parts per million (ppm), while in İzmir this number was 0.038 ppm (1 ppm arsenic is equal to 0.00012 milligrams per liter). He accused political rivals of not mentioning İzmir's arsenic levels because the İzmir mayor is from the Republican People's Party (CHP).

Gökçek noted that the accepted maximum world standard set by World Health Organization (WHO) for traces of arsenic in drinking water was 10 milligrams per liter (mg/L) -- although he admitted that arsenic findings from Ankara dams showed arsenic levels of 13 to 20 mg/L in Ankara reservoirs. However, he said, this was before treatment. "Our treatment facility brings this to below 1 microgram [per liter]. The WHO standard allows arsenic traces of up to 10 mg/L. ... Ours is clean," he insisted.

Gökçek claimed he had heard of a certain "water lobby" that he accused of working to make Ankara's potable water look suspicious. Although Gökçek's statement was denied by Middle East Technical University (ODTÜ) rector Ural Akbulut -- who said that the arsenic levels in Ankara are twice as high as the acceptable limit -- no legal investigation has so far been launched.

Amidst this discussion, İzmir Mayor Aziz Kocaoğlu admitted that according to Health Ministry standards, he as the mayor of İzmir could not tell people that it is safe to drink water from their taps. He said the Health Ministry had decreased the maximum limit allowed for arsenic in tap water from 50 mg/L to 10 mg/L in 2005. Kocaoğlu said İzmir water's arsenic levels usually measured around 12 mg/L but that they were aware of the problem and were working toward compliance with the new standards.

But Gökçek was still not off the hook in the eyes of professional and trade chambers. Erdal Kurttaş, head of the Ankara chapter of the Chamber of City Planners (ŞPO), notes that the Kızılırmak River has high levels of sulfate (linked to stomach upsets) and phosphate salts (themselves sometimes associated with elevated levels of heavy metal contamination). "In addition to industrial waste, there is a fair amount of agricultural chemicals dumped into the river. We do respect Mr. Gökçek's efforts to solve the water shortage problem," he said, but noted that Ankara's water was initially going to be supplied from the Gerede basin in the northwestern province of Bolu. He emphasized that bad planning played a role in the Kızılırmak move.

"It was an obvious fact from years ago that the city would suffer from water shortages. Global warming might have brought this back a few years, but Mr. Gökçek has delayed implementation of this project and has had to hastily bring in water from the Kızılırmak River basin. We would have congratulated him if it wasn't for these environmental risks," he added. Kurttaş said Kızılırmak water could have serious consequences for public health.

Indeed, according to a recent report prepared by the Chamber of Civil Engineers (İMO), Ankara tap water continas on average 21mg/L of sulfate. That figure is 336.8 mg/L for the Kızılırmak River. Kurttaş notes that even if Kızılırmak water could be purified completely, it would eat up a major amount of the municipality's resources, as treating Kızılırmak water is much costlier than it would have been treating the cleaner water of the Gerede area. He also said it was disheartening to know that the mayor was not searching for an alternative solution. "If Kızılırmak did not appear to be a permanent decision, we would of course have been less severe in our criticism," Kurttaş explained.

Water crisis for the city of straits

Meanwhile, İstanbul was not part of a discussion on toxicity levels, but it appears t o be facing a serious shortage since: As of Friday June 11, the amount of water in İstanbul's reservoirs was 31.12 percent of the maximum capacity of the city's reservoirs -- alarmingly low at the beginning of a summer that has already seen unseasonably high temperatures.

One reason was that in summer, water supplied from the Melen project, which contributes an annual 286 million cubic meters of water to İstanbul, decreases. As İstanbul Mayor Kadir Topbaş said last week: "The Melen River normally carries around 750,000 cubic meters of water to the city each day. There has been a decrease in this amount in the last few weeks."

Only two out of five pumps supplying water to İstanbul are currently in order, according to officials from the İstanbul Waterworks Authority (İSKİ). Topbaş also noted last week that the water remaining in the city's reservoirs would suffice for only four months if there was no further precipitation.

Tayfun Kahraman, secretary-general of the İstanbul branch of the ŞPO told Today's Zaman that the Melen naturally attenuates in the summer, for it is fed by melting snow. The most important problem İstanbul has, he noted, is that the city, normally self-sufficient in terms of water, is losing 50 percent of its supplies to unplanned or badly planned urban development. "Water basins are being turned into residential settlements. There are golf courses, Formula 1 tracks, residential homes, everything in İstanbul's water basins." Kahraman said bringing water from the Melen River would not have been necessary if the city had not lost its water resources so ruthlessly to urban projects.

İstanbul University's Kasım Koçak, who offered his opinion to the NTV news channel on Friday, said dam reservoirs should be surrounded with forests to fend off evaporation. He also said building deep, not wide, dams would be the proper construction method to minimize atmospheric water loss.