This is not the first time Turkey's main opposition CHP has accused the military of having acted on the basis of a secret deal. 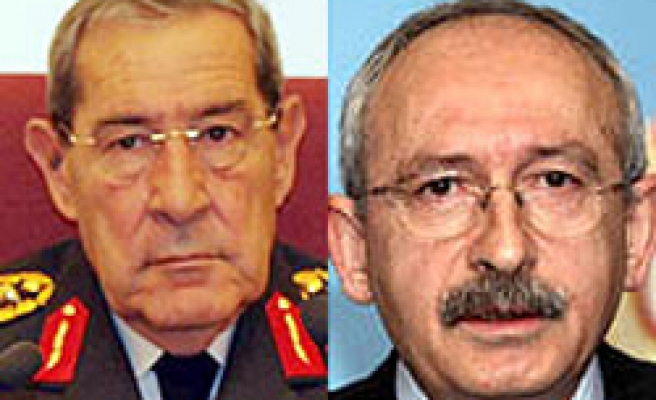 A duel of words between the main opposition Republican People's Party (CHP) and the military that began when the CHP accused the military of having struck a secret deal with the governing party intensified yesterday.

Earlier this week, the CHP directed allegations at the General Staff claiming that the lack of any expulsions of army officers on grounds of anti-secular activities was result of a deal between the army and the ruling Justice and Development Party (AK Party). The military responded by calling the CHP's allegations a "product of the imagination."

The person who publicly accused the military, CHP parliamentary group deputy chairman Kemal Kılıçdaroğlu, said at a press conference yesterday that the General Staff response targeting his earlier statement -- which drew a connection between the unwillingness of the Supreme Military Council (YAŞ) to expel anti-secular officers to an armored vehicle presented to outgoing Chief of General Staff Gen. Yaşar Büyükanıt -- was full of contradictions. Kılıçdaroğlu had claimed on Tuesday that the government and the General Staff had developed a warm relationship. "Given the size of the entire Turkish military, it is interesting to see that no dossier about anti-secularism came to YAŞ," he said.

The response of the General Staff, posted on its Web site on Tuesday evening, claimed the allegations were the CHP's attempts to gain political benefit using the Turkish Armed Forces (TSK); which the statement said was a grave mistake. The text referred to the CHP's claims as "baseless allegations, without any material information, and groundless attacks."

The General Staff declaration responded to Kılıçdaroğlu's allegations over the car presented to Büyükanıt as a gift by saying: "The words of a representative of a political party claiming that a car of an abnormal price was bought for the chief of staff, who has been a target of terrorist organizations throughout his professional life and who has been exposed to four assassination attempts, are not only groundless, but also constitute a shameful example [for everyone to learn from]. That the same political party representative, using these groundless interpretations, has mentioned a close relationship between the Turkish Armed Forces and another political party is a pitiful calumny and an unfortunate elaboration."

The Office of the President did not keep silent in the face of Kılıçdaroğlu's allegations, releasing a statement to the press yesterday saying that it was "not understandable why a representative of a political party should feel sorry for the fact that no decision of expulsion was made at YAŞ, [or why] the good relations between the organs of the state should be criticized, neglecting the general public interest and the necessities of the service." The release also denied allegations that President Abdullah Gül had threatened to refuse to sign any YAŞ dismissal decisions brought to him. "The allegation that a very expensive special car was bought for a retired chief of staff is also a calumny," the release read.

But Kılıçdaroğlu was in no mood to apologize for his earlier allegations yesterday. During a press conference he held on the issue, Kılıçdaroğlu claimed that both the response of the General Staff and of the president were baseless and full of contradictions. Kılıçdaroğlu claimed that media reports that there were no dismissals at the YAŞ meeting were indeed material information and that he had asked that the brand and the price of the car bought for Büyükanıt be made public.

Kılıçdaroğlu's allegations were endorsed yesterday by the CHP as CHP Deputy Chairman Mustafa Özyürek prepared a parliamentary question for Prime Minister Recep Tayyip Erdoğan to answer, asking whether the fact that no dismissals were made at the YAŞ meeting should be understood as lack of any anti-secular activity or whether it was that no lack of discipline had taken place in the army last year. Özyürek recalled in his question that at every single YAŞ meeting from 1966 until the one last week, several officers were expelled from the army. Özyürek also claimed that the lack of dismissals was related to the Ergenekon investigation.

This is not the first time the CHP has accused the military of having acted on the basis of a secret deal. In March of this year the CHP accused the military of prematurely ending an eight-day ground offensive that started on Feb. 21 against the outlawed Kurdistan Workers' Party (PKK) in northern Iraq, under pressure from the US. The military had denied the accusation, saying the operation had concluded because all planned goals had been achieved.