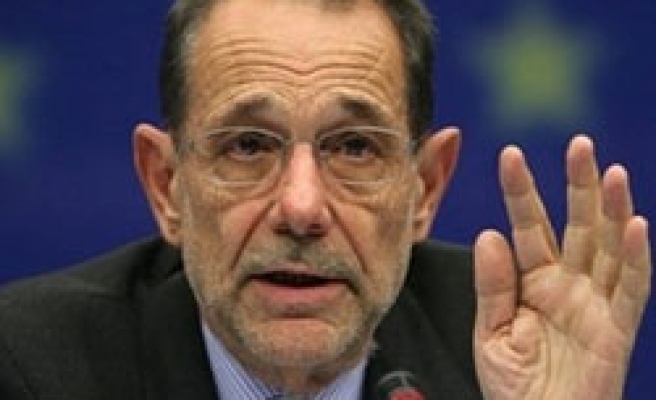 Turkey's Constitutional Court last week agreed to hear a lawsuit that would outlaw Erdogan's Justice and Development Party, turning the courtroom into the scene of a power struggle that threatens to destabilize Turkey.

"I hope the supreme court is sensible in its ruling because it would be a hard blow for Turkey and a blow for Turkey's relations with us in Europe,'' Solana told the European Parliament's foreign-affairs committee in Brussels today.

"The consequences could be very grave."

Turkey has inched toward the EU since starting entry talks in 2005. It has begun talks in six of the bloc's 35 policy areas and completed one. The EU blocked talks in eight areas.

Turkey "would be in a very serious constitutional position were the party to be outlawed," Solana said.

Speaking to reporters after the hearing, he said the impact on Turkey's EU bid would be "nothing good, really -- I don't want to be more specific."

Stressing that the EU endorsed those elections as free and fair, Solana said it would be a violation of European norms for a court to overturn a legitimate result reached at the ballot box.

A court-ordered ouster of a democratically elected leader is "not something very normal," Solana said. "It would be rather unusual."

Erdogan is counting on his popularity to ride out the legal confrontation. Economic growth averaging 7 percent has won him broad support among the middle classes.