The summit in Istanbul is expected to be attended by leaders from 40 African countries, as energy-thirsty Turkey seeks to tap into the African continent's vast resources. 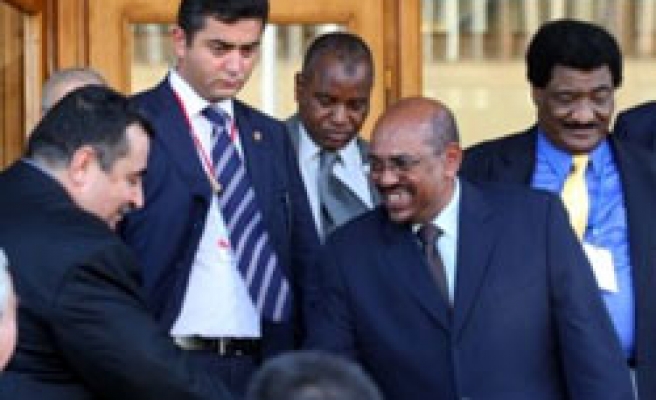 Sudanese President Omar Hassan al-Bashir, on his first trip abroad since the International Criminal Court moved to indict him for genocide, met his Turkish counterpart in Istanbul on Tuesday.

Bashir, in Turkey to attend a Turkey-Africa economic cooperation summit, held talks with Turkish President Abdullah Gul in an Ottoman-era palace by the Bosphorus strait.

U.S.-based Human Rights Watch has called on Turkey to express its support for the court during Bashir's visit.

The summit in Istanbul is expected to be attended by leaders from 40 African countries, as energy-thirsty Turkey seeks to tap into the African continent's vast resources.

Turkey, which has signed liquefied gas agreements with Algeria, is seeking to boost investments and trade with sub-Saharan Africa, following similar moves by emerging powerhouses China and India.

In recent years, Turkey has boosted investments in Sudan.

Chief Prosecutor Luis Moreno-Ocampo last month asked the court to issue an arrest warrant for Bashir on charges of genocide, war crimes and crimes against humanity in Darfur, saying his state apparatus had killed 35,000 people and indirectly at least another 100,000.

Bashir has rejected the ICC and calls the court's move part of a neo-colonialist agenda to protect the interests of developed countries.

Sudan has warned the United Nations of "serious consequences" for its staff and facilities if an arrest warrant is issued for Bashir, a U.N. envoy told the Security Council on Monday.

African and Arab states are pushing for the suspension of moves by the court to indict Bashir and say it could hamper efforts to bring peace to Darfur.

ICC judges could take weeks or months to issue a warrant, but have never failed to issue one after it was requested by the prosecutor.