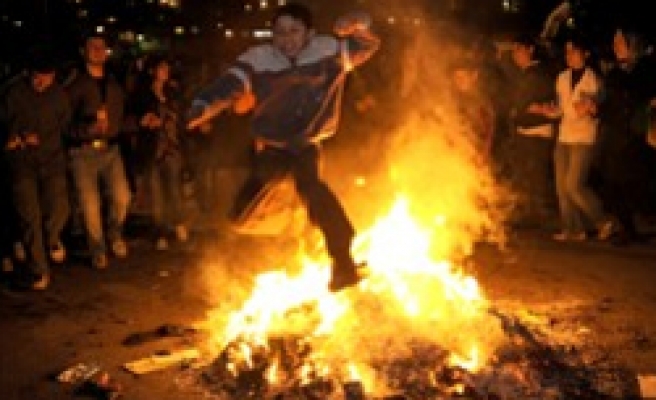 There were official ceremonies in various cities around the country to celebrate the spring festival, a tradition for state agencies in Turkey that took root only in the past few years.

In Ankara's official Nevruz ceremonies held in the National Library's courtyard, Deputy Prime Minister and State Minster for Sports Murat Başesgioğlu, Culture and Tourism Minister Ertuğrul Günay, Education Minister Hüseyin Çelik, the ambassadors of Kazakhstan and Azerbaijan and a number of guests got together to celebrate the "new day" festival. Minister Günay said in a speech: "Nevruz is no ordinary day. It is a special festival of nature and its abundance."

In İstanbul, the Governor's Office organized Nevruz activities. Deputy Governor Mustafa Altıntaş greeted representatives and diplomats from other Turkic states. "Nevruz is revival, unity and solidarity. Nevruz should be seen as a fresh start in a new year," Altıntaş said.

Azerbaijan's Consul in İstanbul Sayyad Aran said Nevruz was a purely Turkish festival. "Our ancestors, who wrote history riding on horseback, got off their horses on Nevruz to water the soil," Aran said in his speech. Students, youth groups and area residents also participated in the festivities.

A large number of residents participated in the official ceremonies in southeastern Tunceli province. Activities held on the city's Cumhuriyet Street were festive and joyous, area journalists reported. In official celebrations in Bingöl, the city's governor, mayor, deputy governors, police chief, bureaucrats and students helped celebrate the spring festival. The Provincial Culture and Tourism Directorate of Adana organized Nevruz celebrations in the city.

There were slight disturbances in some of Turkey's cities as some Kurdish groups used the occasion to highlight separatist demands. The police had to intervene when demonstrators in the Yüksekova district of Hakkari and the Viranşehir district of Şanlıurfa lit bonfires and chanted slogans supporting the Kurdistan Workers' Party (PKK). There were brief clashes between demonstrators and police in both areas. During demonstrations organized by the Democratic Society Party (DTP) in Mersin, a bonfire was lit in front of a map showing the southeastern part of Turkey as part of a Kurdish state. Pro-PKK slogans were also chanted by DTP supporters at this demonstration.

Festivities are expected to continue until March 25.