Turkey's NGOs to raise voices against any coup VIDEO

Several nongovernmental organizations have announced that they will meet on June 21 in İstanbul to express their stance against coup attempts by several institutions that have resorted to anti-democratic practices. 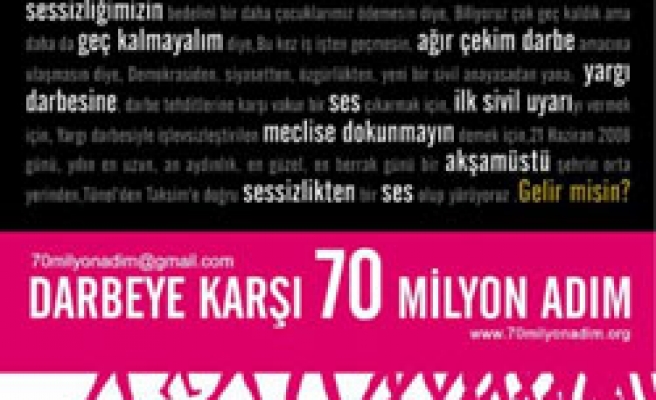 Turkish nongovernmental organizations are to hold a silent rally this weekend in protest of recent "coup attempts," a move that comes in the wake of a May ruling by the Constitutional Court annulling a constitutional amendment package that would have lifted a long-standing headscarf ban on university campuses.

Several nongovernmental organizations have announced that they will meet on June 21 in İstanbul to express their stance against coup attempts by several institutions that have resorted to anti-democratic practices.

A representative from the Young Civilians, a Turkish nongovernmental group noted for its use of sarcasm in protests, stated that a march has been planned in cooperation with several NGOs and civilians for Saturday from İstanbul's historical Tünel to Taksim Square in protest of anti-democratic initiatives.

"The march has been named '70 million steps against coups' and it will begin at 5 p.m. on Saturday. It will be a silent march so there will be no flags, banners or slogans. We will be dressed in white from head to toe and will say 'no' to coup attempts. We think that Turkey is currently going through a protracted judicial coup which started with the release of an e-memorandum on April 27 of last year and continued with the highly contentious 367 criteria instituted last year by the Constitutional Court for presidential elections," said Young Civilians' Tansel Parlak during a phone interview with Today's Zaman.

The release of the memorandum, written by Turkish generals as a warning to the ruling Justice and Development Party (AK Party) and posted on the Turkish General Staff Web site on April 27, 2007, as well as the controversial 367 quorum ruling of the top court that halted last year's presidential elections in Parliament were interpreted by many as an intervention in Parliament's scope of authority, thus as coup attempts.

"The latest leg of these coup attempts was the Constitutional Court's annulment of constitutional amendments that lifted a long-standing ban on wearing a headscarf at universities. We will raise our voices against such anti-democratic practices on Saturday and we will not turn a blind eye to the top court's overstepping its authority and ignoring the will of the people. With Saturday's march we will show that we stand by our Parliament," added Parlak.

The Constitutional Court drew ire from a large segment of the society when on May 5 it annulled a package of constitutional amendments that would lift the headscarf ban in universities.

Pınar Kara from the Association of Human Rights and Solidarity for Oppressed Peoples (MAZLUM-DER) said Saturday's march will bring many people from various ideological backgrounds together.

"Unfortunately, there are at present attempts to stage a coup in our country. We don't want to experience coups. It is the public that suffers most from the consequences of coups. We will participate in this march to show that the public is against coups and we will show that the public wants stability, not a military intervention. The march will be geared toward any single group or ideology; rather, there will be people from all ideologies and identities. This is a march of people who advocate democracy and freedom," she said.

"The ruling party garnered a considerable share of votes in last year's elections. But some institutions, including the Constitutional Court, continue to ignore the will of the people and annul parliamentary decisions. On Saturday we will express that the public will not remain silent in the face of such acts, which are not compatible with democracy," she remarked.

The AK Party received almost 47 percent of the entire national vote on July 22 of last year, and now holds 341 seats in the 550-strong Parliament.

Halil Aksoy, provincial chairman of the pro-Kurdish Democratic Society Party (DTP) in İstanbul, said his party will participate in the march to express its outrage against anti-democratic practices.

"Turkey has suffered from several coups through its history. We have witnessed repeated coup attempts in the last couple of months. Such attempts distort the political atmosphere and the anti-democratic effects of coups stay for a long time," he noted.