Turkey's pension system one of the world's largest: Minister

Turkish Misnister Simsek said that 60 percent of those Turks seeking employment have education lower than high school but unemployment implies being without a career. 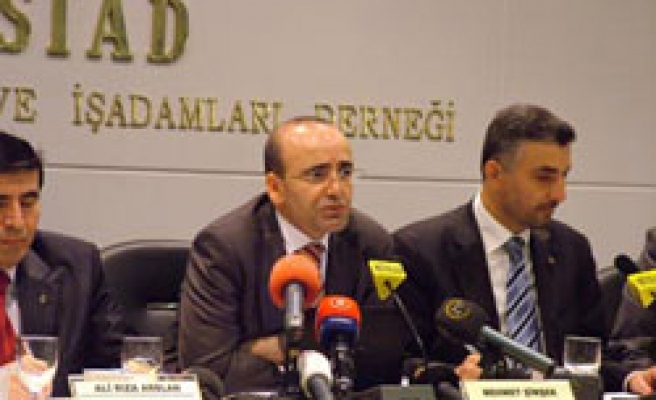 Turkish State Minister Mehmet Simsek said Tuesday the pension system in Turkey is one of the world's largest.

Speaking on Turkey's new economic program in the first half of 2008 at a meeting organized by the Independent Industrialists' and Businessmen's Association (MUSIAD) in Istanbul, Simsek said, "Turkey's pension system is very generous when compared to global standards."

There have been great changes and progress in Turkey since 2002, Simsek said.

"However, not everything is perfect. There are many problems in the Turkish economy that needs to be solved," Simsek said.

"Structural problems in Turkey can not be overcome with daily approaches and simple solutions," Simsek said.

"Turkey must find solutions without falling into the trap of populism," Simsek stressed.

"Turkey is the only country in the world that made three reforms in social security in only two years," Simsek said.

"Real interest rates are high in Turkey due to inadequate savings," Simsek said.

"We have taken important steps to improve the social security system and these steps are far away from populism. We should be able to see the benefits of the reforms made in the next decade," Simsek said.

"I wish Turkey did not have a deficit of 850 quadrillion liras in the past 15 years. Had we used those funds in education, research and career areas, Turkey would have been a different country today," Simsek noted.

Reminding that the retirement age in Turkey would be 65 in the year 2046, Simsek said that the employment sector in Turkey has serious structural problems.

"Unemployment implies being without a career. 60 percent of those Turks seeking employment have education lower than high school. We face serious unemployment in Turkey," Simsek said.

"What really needs to be done is to make a reform in the educational system of Turkey," Simsek stressed.

"We are making serious efforts to improve the quality of education in Turkey," Simsek said.

"As conditions permit, we will take steps in the direction of supply. Employers in Turkey are more competitive today than they were in the past," Simsek said.

Simsek stressed that the most important reform in the work force has to do with "flexibility".

"Aside from unemployment insurance, there is severance benefits in the Turkish economy. Severance benefits no longer exist in many countries. There are steps we need to take in this area," Simsek said.

"There are reforms we must make in agriculture. We need to promote production and efficiency," Simsek said.

Pointing out that global food prices are on the rise, Simsek said that Turkey can turn this crisis into an opportunity.

"Turkey is a country having great potential to increase its wealth by creating jobs and improving efficiency," Simsek said.

"The topic of energy has become an important one in the recent years. Turkey is not energy efficient and is dependent on foreign sources for energy," Simsek noted.

"Turkey's current account deficit for 12 months was 43.1 billion USD in May. Turkey's energy imports during the same term was 41 billion USD. I must underline that Turkey has not come to this stage in a day," Simsek said.

"50 percent of electricity produced in Turkey takes place by utilizing natural gas. We are working to create diversity in energy sources of Turkey," Simsek said.

"We will continue to improve the investment climate in Turkey. We will make adjustments on the tax system of Turkey," Simsek also said.