Turkish Army calls off offensive in northern Iraq, for now

Troops returned to their bases in Turkey yesterday after an incursion into northern Iraq against the outlawed PKK there. 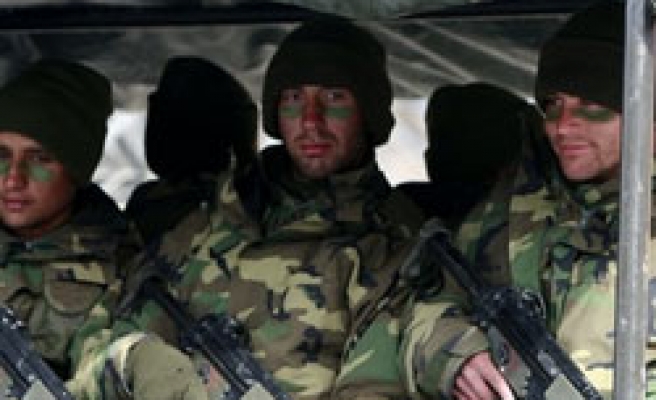 A convoy of Turkish military trucks carrying elite troops return from northern Iraq in Çukurca in Hakkari province at the Turkey-Iraq border on Friday.

Troops returned to their bases in Turkey yesterday after an incursion into northern Iraq against the outlawed Kurdistan Workers' Party (PKK) there, the military announced, ending a week-long offensive earlier than expected and stating that similar operations would be carried out in the future if necessary.

The military and the government have repeatedly said the troops would return as soon as the planned objectives have been accomplished. But even the most optimistic estimates saw the operation as lasting at least two weeks. In a statement posted on its Web site, the military set out the objectives as "rendering terrorists in the region ineffective and damaging the physical infrastructure used by the organization." The PKK's heartland, the Zap region near the Turkish-Iraqi border, has been targeted in the offensive, it also said, contrary to earlier media reports that the PKK bases in the Kandil Mountains, located about 100 kilometers away from the border, would be rooted out.

Opposition parties have called for a prolonged stay in northern Iraq, saying the troops should not return without establishing a buffer zone or destroying all PKK targets in northern Iraq. But the government and military have said repeatedly that the operation would be limited in time and scope. The statement also said: "Of course, it is not possible to render the terrorist organization completely ineffective with one operation in a certain region. But it has been proven that the north of Iraq is not a safe place for the organization."

The military said some 300 terrorists were in the area the operation targeted before the incursion began. Throughout the operation, which began late on Feb. 21 and lasted until yesterday morning, some 240 terrorists were killed and the rest fled the area, according to the military. Shelters, communication facilities and logistics materials were also destroyed. "Thus, it has been considered that the objectives of the operation set out at the beginning have been accomplished," it said. "Our forces have returned to their bases in Turkey as of the morning of Feb. 29 after searching and combing the area."

The ground offensive, the biggest anti-PKK operation in a decade, had the consent of the United States, which provided intelligence to assist the counter-PKK attack, but Washington had stepped up its pressure for a quick conclusion of the operation over the past few days, fearing a prolonged stay could destabilize northern Iraq and harm US ties with Iraqi Kurds.

US Defense Secretary Robert Gates, on a visit to Ankara on Thursday, repeated once again that the operation must be short term, and US President George W. Bush said hours later that "the Turks need to move, move quickly, achieve their objective and get out."

Chief of General Staff Gen. Yaşar Büyükanıt said in response that the "short term is a relative notion" that could mean "one day or one year." Government officials also told Gates that the Turkish Army had no intention of staying once its objectives are accomplished.

The military, which has conducted aerial strikes on PKK targets in northern Iraq since Dec. 16 under a parliamentary authorization valid for one year, suggested that more cross-border operations could take place in the future if necessary. "The north of Iraq will be monitored closely in regard to PKK activities, and the terrorist organization will not be allowed to pose a threat to Turkey from this region," it said. "Anti-terror measures will continue at home and abroad."

In Washington, White House Press Secretary Gordon Johndroe said "it was a targeted and relatively short operation" as requested by Gates and added, "But I would certainly expect that in the future, that unless the PKK gives up terrorism, that we're going to have to continue to work with the Turks and the Iraqis to go after them."

Throughout the operation, some 272 PKK targets were hit. Dozens of caves, shelters, command centers, training and logistics centers and transportation facilities have also been destroyed. The offensive has claimed the lives some 27 security personnel, including three government-paid village guards. Tanks or other armored vehicles have not been used during the operation, the military said.

The military also asserted that there was no outside influence on the decision to pull out troops, referring to US statements on Thursday calling for quick withdrawal. "The start and end dates of the operation have been decided purely on the basis of military needs and requirements. There has been no inside or outside influence on the decision," it said. "Some of the troops had already returned on the day when some reports on this issue emerged," it went on, referring to Thursday, when Gates visited Ankara.

But in a sign that the timing of the withdrawal might have come as a surprise to the government, the Prime Ministry revised the text of an address by Prime Minister Recep Tayyip Erdoğan to the nation yesterday afternoon to take into account the troop pullout, hours after an embargoed copy of the speech which spoke of continuing operations was sent to the semi-official Anatolia news agency.

Erdoğan, who was attending an economy meeting when the first reports of Turkish withdrawal broke, met with his military advisor, Lt. Gen. Nusret Taşdelen, later in the day. Taşdelen is also the head of the Operations Department at the General Staff.

The beginning date of the operation also came as a surprise, as many experts had predicted it would be unwise to launch a ground offensive in the mountainous northern Iraq in the winter. The military said the timing was intentional, in order to catch the PKK unprepared and to make best use of the armed forces' capacity to carry out operations in less favorable weather conditions.

The statement called on PKK members to leave the organization and take refuge in the "justice and compassion of the state."

Hours before the military statement was released, Iraqi Foreign Minister Hoshyar Zebari said all Turkish troops had withdrawn, adding: "We welcome this; we think this is the right thing for Turkey to do." He said the withdrawal showed that the "military carried out its promises" to remove Turkish troops after finishing operations against the PKK.

In Ankara, however, an opposition lawmaker slammed the government for what he called "unfortunate timing" of the troop withdrawal. "The timing was wrong. The government has failed to show enough political will to support the operation" after Gates called for a quick end to it, said Oktay Vural, deputy parliamentary group chairman of the Nationalist Movement Party (MHP).

Earlier, a US official in Baghdad said: "We are seeing a limited portion of the troops that had entered Iraq moving back toward Turkey. [It is] too early to call this a withdrawal."

Iraqi Kurds, long suspicious of neighboring Turkey, fear it is seeking to undermine the autonomy of Iraq's oil-rich Kurdish region. Ankara says it wants only to end terrorism.