Daily Taraf said Turkish army had waged a secret propaganda campaign to win public support for its tough stance on secularism and opposition to key policies of the ruling AK Party. 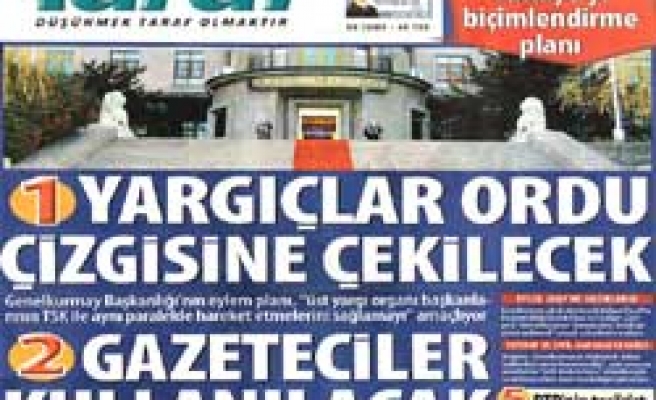 Turkey's military denied a report on Friday that it had waged a secret propaganda campaign to win public support for its tough stance on secularism and opposition to key policies of the ruling AK Party.

The newspaper Taraf said the army had launched an action plan in September 2007 included enlisting the judiciary's support, holding frequent contacts with the media and reaching out to key figures to influence public opinion in favour of secularism.

It said the plan was set out in an 11-page internal document belonging to the Chief of General Staff's office.

"There is no such official document or plan approved by commanders and registered by the Chief of General Staff," the military said in a statement posted on its web page.

The Turkish Armed Forces, which have a mission "to protect" the Republic of Turkey for ever, are strong enough not to be affected by cheap propaganda of some circles, it added.

It added that Armed Forces would manipulate media organs and opinion leaders, make journalists advocates of the General Staff and weaken opponents.

The military has ousted four governments in the past 50 years.

The Constitutional Court is currently hearing a case brought by the Court of Appeal chief prosecutor, who has charged the AK Party with being a focal point of anti-secular activities.

The prosecutor wants the party closed down and 71 leading political figures, including Prime Minister Tayyip Erdogan, banned from party politics for five years.

The AK Party denies the charges and says they are politically motivated.