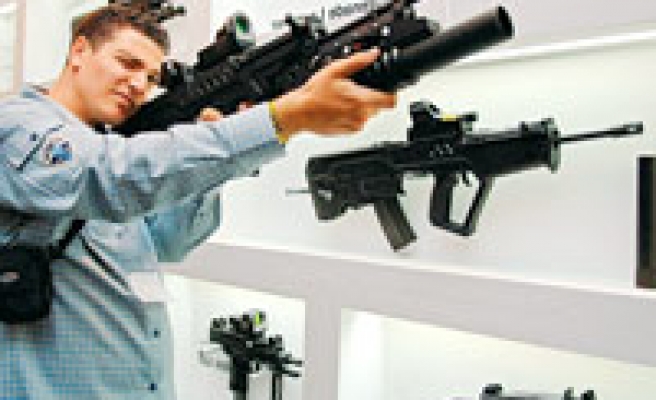 Turkey's political leadership expressed the need to keep its armed forces as strong as possible in order to be able to maintain peace and stability both inside the country and in the region at a ceremony held on Tuesday in the Turkish capital for the opening of the four-day-long International Defense Industry Fair (IDEF'07).

The opening ceremony for IDEF'07, which is hosting defense ministers as well as high-ranking commanders from more than 40 countries, with 434 defense contractors displaying their wares, was attended by Prime Minister Recep Tayyip Erdoğan and Defense Minister Vecdi Gönül as well as by Turkey's top commander, Chief of General Staff Gen. Yaşar Büyükanıt.

"The Turkish Republic -- which has always attributed high importance to independence and liberty throughout its history -- has been conscious of the need to preserve and maintain its capability of protecting its sovereign rights, its territorial integrity and its national and international interests," Erdoğan said in a speech delivered at the ceremony.

Referring to the well-known words of founder of the Turkish Republic Mustafa Kemal Atatürk -- "Peace at home, peace in the world" -- Erdoğan emphasized that the 84-year-old Turkish Republic had sought peace not only for itself but also for the entire world, particularly for its neighbors, right from the beginning.

Defense Minister Gönül emphasized in his speech the need to keep the country's armed forces strong to be able to protect peace and maintain security in a difficult geography.

Following the speeches Erdoğan, together with Büyükanıt, Gönül, Industry and Trade Minister Ali Coşkun and foreign mission representatives, cut the ribbon to open the fair -- organized by the Foundation for the Strengthening of the Turkish Armed Forces (TSKGV) and fair organizer Tüyap under the sponsorship of the Defense Ministry.

Buzzword of the fair: Innovation

One of the world's five biggest defense fairs, IDEF'07 offered numerous novelties this year. Three hundred thirty-four foreign and 162 domestic companies are showing off their products at the fair. The products exhibited give hints about the current technological level of the defense industry. For example, a sensor, buried a half meter under the earth to track any intrusion within 50 meters, will provide effective help against terrorists. These sensors can perceive whether the passing object is human or animal and whether they are armed.

Three-dimensional radar produced by Swiss SAAB is also among the interesting products on display at the fair. It possesses the capabilities of three different types of radars -- those for land, air and water -- all at the same time.

ASPİLSAN is demonstrating its revolutionary lithium ion battery cells. These cells are smaller and more complex than conventional ones, but far stronger and more durable. The company has recently started mass production of lithium ion cells and has already sold 15,000 to the military in 2007.

OTOKAR is displaying its newest 20-milimeter cannon platform while ASELSAN introduced its unmanned land vehicle "İzci." METEKSAN, another defense company, still hasn't been able to find a suitable name for its latest product, a bomb-disposing robot.

There was a 61 percent increase in attendance at this year's defense fair compared to the last one held two years ago, indicating a visibly increased interest in Turkey's lucrative arms market after a period of stagnation following the devastating February 2001 economic crisis.

Turkey's decision to change the time for holding the fair -- from September to May -- also played a role in the higher participation, as September will witness other international defense fairs organized elsewhere in the world, with arms companies unwilling to participate in back-to-back fairs due to their high cost.