Two parties, the Motherland Party and the True Path Party, which set out to merge under the Democrat Party (DP) umbrella, gave up their plans for union days before the merger was set to be made official. 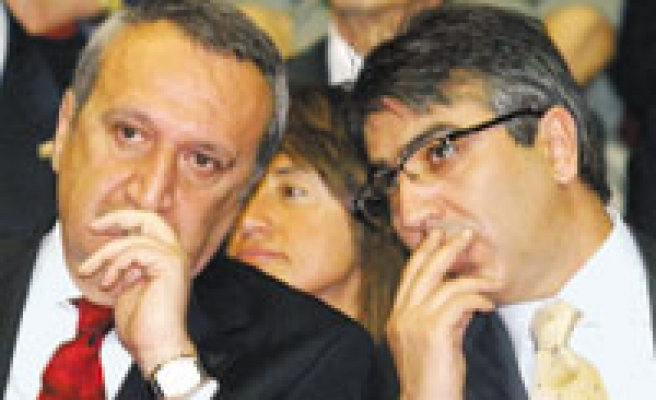 Two parties, the Motherland Party (ANAVATAN) and the True Path Party (DYP), which set out to merge under the Democrat Party (DP) umbrella, gave up their plans for union days before the merger was set to be made official.

The parties will part ways for the general elections. DYP leader Mehmet Ağar and ANAVATAN leader Erkan Mumcu are exchanging mutual accusations. Former Prime Minister Mesut Yılmaz has played a big role in the termination of the center-right unity. Two leaders who experienced crises during the formulation of the deputy candidate-lists gave up on uniting when the Motherland Party transferred its real estate to the New Democratic Party (YDP), whose royalties belong to ANAVATAN. Former DYP parliamentary group deputy chairman Turhan Güven said: "Neither leader was sincere. Nothing will happen even if they merge after this stage. The public has serious distrust in them."

The difference of opinion between Mumcu and Ağar turned into serious distrust when Yılmaz, the former ANAP (now ANAVATAN) leader, and Ağar met with each other secretly despite Mumcu having repeatedly informed Ağar of his disquiet about his close relations with Yılmaz. Yılmaz continued meeting with Ağar, whom he told to nominate not only himself, but also some of his colleagues for parliament from the DP's deputy candidate lists. Yılmaz declared that he would run for parliament as an independent candidate affiliated with the DP and proposed Celal Doğan, former Gaziantep mayor from the Republican People's Party (CHP), Hikmet Çetin, former parliament speaker from the CHP, Hüsamettin Özkan, former deputy prime minister from the Democratic Left Party (DSP), İbrahim Albayrak, a former executive at the Galatasaray sports club, Nesrin Nas, former deputy chairwoman of ANAVATAN, Nejat Arseven, former deputy parliamentary speaker and Cavit Kavak, former state minister to Ağar as deputy candidates. Mumcu stated that although he did not oppose Yılmaz's candidacy, he did not find Yılmaz pressuring for his own colleagues a proper thing to do.In an effort to prevent a premature termination of the center-right union, Yılmaz made a statement in which he asserted that he would not urge his colleagues to be nominated. But this time, the two leaders could not agree on deputy candidate lists. Four days before the deadline for submitting deputy lists to the Supreme Election Board (YSK), Mumcu took a list of 275 prospective deputy candidates to Ağar.

Referring to 50 people who were given places in Mumcu’s list, Ağar asked who they were. “They are my advisors and close colleagues,” answered Mumcu. With a rising intonation, Ağar said: “You have populated the lists with your advisors. Who knows them? Do you think we will increase our votes with them? How many votes will they secure? Can’t you find somebody else to bring votes to us? I only know Edip Safter Gaydalı among them, and only he can increase our votes.” Ağar then showed his own list to Mumcu and told him that they cannot place ANAVATAN Deputy Chairman Mehmet Keçeciler in first place in Konya. Moreover, Ağar gave former Justice Minister Oltan Sungurlu second place in Gümüşhane. Ağar chided Mumcu, saying, “You oppose Yılmaz’s candidacy, but you don’t see his capacity [for securing votes] in the Black Sea region.” Then, Mumcu returned to his party with his list.

Unable to get what he sought, Mumcu consulted the party’s lawyers and decided to transfer the party’s real estate to the New Democratic Party (YDP), whose royalties belonged to ANAVATAN, before the party congress to be held June 2-3. Upon being informed of Mumcu’s decision, Ağar stated that this amounted to a step which would block the merger, and wanted Mumcu to be sincere. On the other hand, Mumcu, speaking to NTV, stated that Ağar should abide by the merger protocol. Ağar did not respond to Mumcu’s call, and did not attend the ANAVATAN party congress. Finding no reason to attend the party congress, Ağar went to İstanbul.

ANAVATAN parliamentary group deputy chairman Süleyman Sarıbaş harshly criticizes Ağar’s attitude: “Unfortunately, some people in Turkish politics consider themselves barons. Even if they are purged by the nation, they try to return to politics without respecting the nation. Mr. Ağar, too, regards himself as among these so-called barons. The war is fought between the nation and these barons. Mr. Ağar should understand that he cannot engage in politics without taking heed of the nation’s demands. He fails to understand this. We will act independently. We will seek the people’s support without seeking some people’s approval and only relying on our own power. The nation may or may not support us. But history will justify us. In time, all dirty plots will be unearthed.”

Erkan Mumcu: We owe an apology to Turkey

Erkan Mumcu apologized to Turkey over the dissolution of the center-right union at ANAVATAN’S ninth party congress. He further apologized to Yılmaz for remarks implying that Yılmaz is less liked than terrorist leader Abdullah Öcalan. “Due to state of mind, I said this in anger. Though my anger may have been justified, I was not right in saying those words. For this reason, I apologize to everybody who was offended by my remarks, particularly those directly concerned. Although the circumstances may excuse me, I prefer to be honest,” he said.

He emphasized that Turkey had missed a significant opportunity. “Both Mr. Ağar and I owe an apology to Turkey,” he said. He thanked the party’s representatives for re-electing him as the chairman.

Kayalar and Gaydalı stated that after they resigned from ANAVATAN, they were invited by the CHP to run for Parliament from their lists. Cengiz Altınkaya, a former minister who resigned from ANAVATAN, is reportedly seeking a party to join. Ankara Chamber of Commerce (ATO) Chairman Sinan Aygün disclosed that during their recent meeting, former President Süleyman Demirel had said, referring to Mumcu, “You must amputate a cancerous arm so that cancer does not spread to the entire body.”

Gaydalı said that he had accepted CHP leader Deniz Baykal’s invitation and that he would join the CHP and be nominated for Parliament from its deputy lists for the elections to be held on July 22. As the politicians resigning from ANAVATAN continue to join the CHP, interesting comments are being made backstage. In particular, political strategists place emphasis on the fact that resignations from ANAVATAN came after the secret meeting held between Demirel and Baykal on Saturday. Rather unexpectedly, Baykal paid a visit to Demirel at his house on Güniz Sokak. With only 24 hours until the finalization of the deputy candidate lists, these deputies joining the party have upset all plans concerning the lists. Demirel had previously sent İsmail Amasyalı and his son-in-law İlhan Kesici to the CHP.