Turkey has become such a popular vacation spot for Arabs that they threaten to replace Russians and Europeans as the largest tourist group. 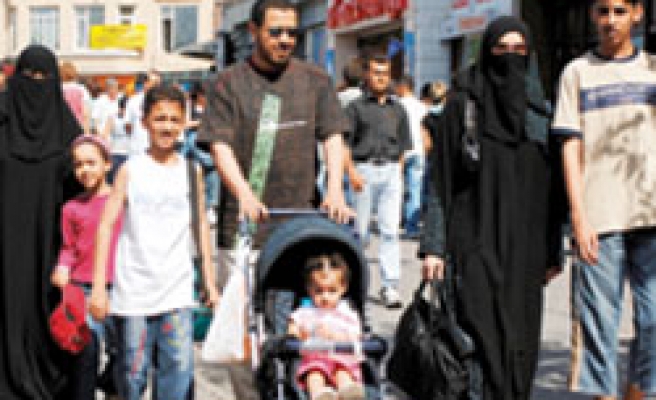 An Arab family walks through İstanbul's stylish İstiklal street. The number of tourists from Arab countries has increased significantly this year.

Turkey, particularly İstanbul and Bursa, has experienced a large influx of Arab tourists in the past year; this is partially due to the export of Turkish pop culture, which has proved extremely popular in Arab countries.

Traditionally large Arab families and their extravagant spending habits have contributed to both the number of Arab tourists and to the boost in the tourism industry.

Turkey has become such a popular vacation spot for Arabs that they threaten to replace Russians and Europeans as the largest tourist group.

Currently, however, there is not a single Arab nation represented in the list of top 10 countries that send the most visitors to Turkey. The only country even representing the Gulf region on this list is Iran, which is also not Arab.

Taking a closer look at the number of tourists coming to Turkey provides a clearer picture of the situation. The United Arab Emirates sent 911 people in 2006 and 925 in 2007; by June of this year, however, the number had already reached 2,347. Similarly, in 2006 Kuwait sent 811 visitors, but this year has already sent 2,808.

According to Turkish Hoteliers' Association (TÜROB) Chairman Timur Bayındır, Arab people choose Turkey because it possesses lush vegetation and a cooler climate. Speaking to Sunday's Zaman, Bayındır said: "Yalova, Bursa and Bilecik are full of green trees and fresh water, which are absent from most Arab countries. This is why they choose to visit these places."

Another reason that Arabs like to come to Turkey is because most of the country is Muslim. As the former capital of the Islamic world, İstanbul holds a special allure for Arab tourists, particularly because of its Islamic architecture.
Wealthy, conservative Arabs are often reluctant to travel to Europe or similar locales because they seldom offer Islamic ways of vacationing. Bayındır cites this as another factor in Turkey's popularity among Arabs.

Kuwaiti Yusuf Bunashi, 20, is currently vacationing in Turkey with his family. According to Bunashi, his family chose Turkey largely because it is a Muslim country. His father, Saleh Bunashi, said, "We heard good things about Turkey and we decided to visit this country." Ali Shamsi from the United Arab Emirates said in a street interview that he is a fan of the Galatasaray football team, and that this seriously influenced his decision to come to Turkey.

Mehmet Ali Suluta?, one of the founders of the Turkish-Arab Businessmen's Association, said to Sunday's Zaman that many Arab people feel discriminated against in Europe. "Turkish people have cultural, religious and friendship ties with Arab people. They certainly would prefer Turkey," he said. He went on to add that television and other media sources have played a crucial role in promoting Turkey and its culture. "It's true that the increase in Arab tourists stems from Turkish films in Arab countries," he said.

Cüneyt Bengü, president of Mercan Tourism Company, deals primarily with tourists from Arab countries. He said there are several reasons for the increase in Arab tourists. "After the events of 9/11, obtaining a visa made it very difficult for Arabs to visit European countries. Furthermore, Lebanon, formerly a popular tourism destination, has experienced some turmoil in domestic politics, and Syria has a limited number of hotels," he said.

According to Bengu, approximately 25-30 million people from Arab countries participate in international tourism. "We received only 550,000 Arabs in previous years, yet this year there was a tremendous increase of 40 percent," he said. Bengu also names Turkish entertainment media as affecting this year's increase in Arab tourists. "In the last two years, Turkey has paid a lot for tourism promotion. But non-promotional Turkish entertainment in Arab countries also had an enormous effect," he said.

ONE ARAP EQUIVALENT OF 15-20 EUROPEAN TOURISTS

Arab tourism has proven to be very economically beneficial to Turkey. According to Bengu, 90 to 95 percent of Arab tourists stay in five-star hotels. "One Arab tourist is the equivalent of 15-20 European tourists. They spend an extremely large amount of money. They are making a giant contribution to our country's economy," he said.

Bengu stated that the leading countries in Arab tourism are Jordan, Syria, Lebanon, Kuwait and Saudi Arabia. While he estimates that this year's number of tourists from these countries will be around 700,000-750,000, Bengu contends that Turkey is still actually entertaining a relatively small percentage of overall Arab tourists and in fact should be receiving more. "I think we should receive at least a million tourists each year," he said.

Dubai-based private TV station MBC broadcast the Turkish TV series "Gümüş" from 2005 to 2007, and as a result the show gained huge popularity among Arabs. Ranging from Kuwait to Palestine to Saudi Arabia, people will even leave work to watch the show. "The show caused Arabs to radically change their minds about Turkey," said Tareq Alrawaf, a frequent tourist from Saudi Arabia. "People think Turkey is like heaven." Saleh Muhammed, also a tourist from Saudi Arabia, told Sunday's Zaman he was not affected by the show, but that his children wanted to come because of it.

Sedat Kutlu, president of the Turkey-based trade and logistics company Imisk, stated: "There has been an incredible increase in global tourism over the past three to four years, so any increase of tourists in any country should be seen as a normal trend. However, I don't deny the fact that Turkish films in Arab countries have partly affected travelers' knowledge of Turkey."

Kutlu claimed that Turkey is the closest tourist destination for Arabs after considering the unsafe situation in Iraq, Lebanon and other countries in the region. "Turkey provides comfortable transportation both inside and outside of the country, and the freedom within Turkey is alluring to Arab tourists. They mainly prefer Konya, İstanbul, Antakya and Mersin," he said.

No matter how Arabs get to know Turkey -- whether it is through films, word of mouth or Turkey's own tourist bureau -- it is certain that Turkey should expect to see more tourism in the future.