A large number of representatives from human rights groups, NGOs, media members, trade unions and academia condemned the General Staff declaration and urged the military to stay out of politics. 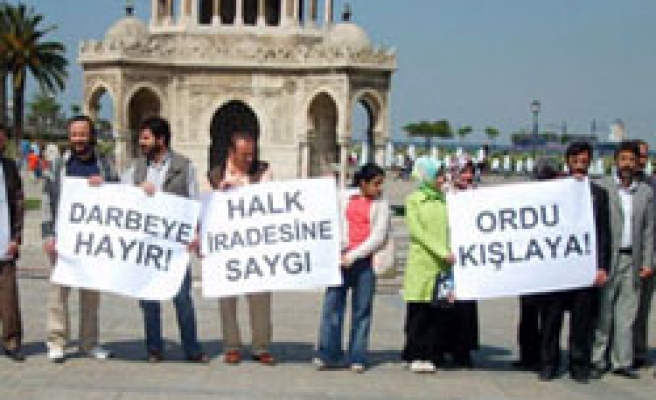 A large number of representatives from human rights groups, civil society organizations, media members, trade unions and academia on Saturday condemned the General Staff declaration and urged the military to stay out of politics, after it issued a veiled threat to the government over its candidate for president.

Describing the General Staff's latest statement in which it said it would act to defend the separation of state and religion as "an open interference in democracy," the Ankara-based Human Rights Association (?HD) urged all to claim democracy against this move, which it said has harmed both the democratic characteristic of the state and the rule of law.

"Even the 1982 Constitution, which we consider anti-democratic and which we are striving to change, defines the Turkish Republican state as 'a democratic state of law'," the ?HD said in a written statement released on Saturday.

A democratic state means that civil organizations and civil politics fulfill their responsibilities in a free environment, free of all kinds of interference. The interference of the armed forces in this sphere for whatever reason destroys the democratic characteristics of the state," the ?HD said, while emphasizing the vitality of the rule of law in a democratic state.

"In a democratic state of law, there are mechanisms for investigating illegal and criminal attitudes and actions. None of the organs or institutions of the state can assume itself as sole protector or representative of the state and cannot grant itself the right to interfere in the spheres of responsibility of other organs or institutions," the ?HD said, bringing to mind the fact that the General Staff statement would act to defend the separation of state and religion.

"Most important of all is the approach that will be assumed toward this statement. We call on all political parties, labor unions, civil society organizations, professional organizations, human rights organizations, intellectuals and universities to claim democracy," the ?HD concluded.

Human rights organization MAZLUM-DER President Ayhan Bilgen condemned the statement and called on independent judicial organs to evaluate the statement in terms of constitutional, military and penal codes. Bilgen also asserted that the statement would significantly influence a decision to come out of Turkey's Constitution Court regarding an appeal made by the main opposition party to annul the presidential election process in Parliament.

All of Turkey's trade unions, including the Confederation of Revolutionary Workers' Unions (D?SK), the education professionals' union E?itim-Bir-Sen, workers' union Hak-?? and public servants' unions Kamu-Sen and Memur-Sen as well as press workers' union BASK issued statements condemning the statement and highlighted that the only way out of a potential of crisis lies in democracy.