According to the document, which was seized by the police in a final wave of raids and detentions, the group, known as Ergenekon, had nine primary aims. 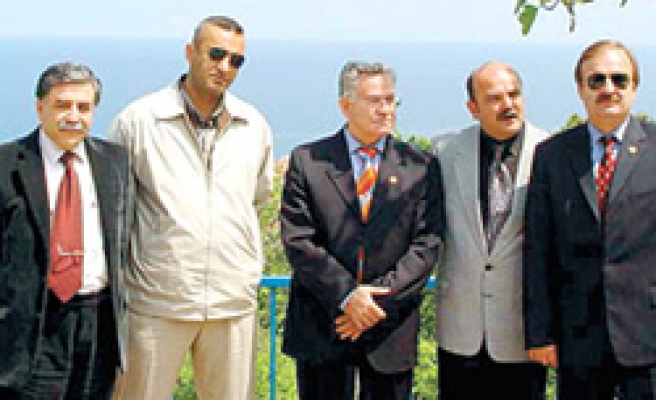 Newspapers yesterday disclosed a document that was deemed the "charter" of a shady network that has been indicted for seeking to overthrow the government.

According to the document, which was seized by the police in a final wave of raids and detentions earlier this month, the group -- known as Ergenekon -- had nine primary aims.

The document lays out the military structural organization of the group that was meant to realize these goals. The group was made up of seven units called the Presidency of Ergenekon, Intelligence Command, Intelligence Analysis Department Command, Operations Command, Financing Administration, Intra-organizational Research Department Command and the Administration of Theory Design and Planning, which is considered, along with the finance department, to be a civilian unit. Ergenekon is a shadowy criminal network made up of retired -- and possibly current -- army members, academics, journalists and others.

Dozens of Ergenekon suspects currently in jail are being accused of plotting a coup against the Justice and Development Party (AK Party) government after a yearlong investigation that started when police discovered in July 2007 a house full of ammunition and guns in İstanbul's Ümraniye district. The prosecutors also suspect that the group is behind a 2006 Council of State shooting that left a senior judge dead, and a hand grenade attack on the Cumhuriyet newspaper's İstanbul office, also in 2006, and possibly other politically motivated crimes aimed at creating chaos in hopes of triggering a coup.

The charter printed in the Turkish press yesterday made it a rule to keep administrators and agents apart. "Although there is nothing wrong with the commanders and heads of these units in knowing each other, it will most certainly place Ergenekon in a reputable position among intelligence agencies if they do not know the scope of the duties and responsibilities of each other. Agents to be employed in any of these six units should in no way have contact with personnel in other units. There absolutely has to be a distance between the higher level administrators of the group and the employees and agents. In the opposite situation, protection of higher-level administrators cannot be ensured, which in turn would risk the organization itself and its image," notes the charter.

Ergenekon's charter also lays out criteria for recruiting agents from among the "trustworthy" members of the Turkish Armed Forces (TSK). "These agents have to be ruthless people with the ability to perform independently. They should take orders directly from the commander of Ergenekon and they should be unknown to higher-level administrators, the organization's personnel and its agents."

Under the chapter "Policies," the document details the basic plans of the organization. "In the 21st century, intelligence agencies will inevitably be the institutions shaping world politicians and global policies," the document's introduction states. It notes that in the past century, globalization has led to the erosion of cultures and of the pillars of the world's societies. The document also says the forces behind globalization want to set up a "world government," claiming that the only way to protect a country is to stop politicians that act counter to "ideologies that violate principles of a regime in place," adding that the most effective way to stop such politicians is to "assassinate" them.

Ergenekon can finish off PKK if it wants to

Meanwhile, in an interview with the Yeni Şafak daily, Tuncay Güney, a former journalist whose ties with various secret services, both domestic and international, have been documented, stated that Kurdish separatist terrorism would come to an end if the Ergenekon gang wanted that to happen. Güney, who now lives in Canada and works as a rabbi, has suspected ties to the group. Güney came to prominence when the first documents related to the Ergenekon gang were seized on his computer in a 2001 police raid.

Güney, currently a rabbi at the Jacobs House Jewish Community Center in Toronto, praised Ergenekon prosecutor Zekeriya Öz for having "done a great job" so far in the investigation, although he expressed doubts that the operation would be very successful in the end. "However, they are very close to the end and I think it is very difficult moving on further from this point. There is no power in Turkey that can stop Ergenekon," he said, expressing doubts that the investigation will bring about the collapse of the crime group.

These people are Susurluk people

He recalled the investigation into the Susurluk affair of 1996, when a police chief, a southeastern tribal leader whose men were armed by the state to fight separatist violence, and an internationally sought after mafia boss were involved in an accident while riding in the same car. No serious arrests came out of that investigation, which had actually exposed some very shady deep state links. Brig. Gen. Veli Küçük, retired from the armed forces, was detained but then released in the Susurluk investigation.

Küçük, currently in jail pending trial on charges of being one of the top leaders of Ergenekon, was a key suspect in the Susurluk trial as well. "What happened in Susurluk? Aren't these the bosses of Susurluk?" Güney asked, pointing to the inconclusiveness of that investigation.

Güney said if all the links behind the assassination of prominent businessman Özdemir Sabancı by a militant of the extreme left Revolutionary People's Liberation Party/Front (DHKP/C) organization -- a case that already found its way into the indictment according to news reports from Wednesday -- could be revealed, that would significantly help solve questions regarding Ergenekon. The same thing, he said, applies to the assassination of Kurdish drug lord Behçet Cantürk. Güney also claimed that Ergenekon was behind the shooting of former Human Rights Association (İHD) President Akın Birdal, who survived the attack.

Güney also stated that Abdullah Öcalan, the head of the Kurdistan Workers' Party (PKK) who is currently jailed on an İstanbul island, had ordered his organization "not to mess with Ergenekon." He noted that both Öcalan and Cemil Bayık, another senior PKK leader who has not yet been captured by Turkish authorities, should reveal what they know and do everyone a favor. "I think newspapers would do a great service to the country if they wrote openly on the nature of the Ergenekon-PKK relationship," he said.

Among Ergenekon suspects currently in jail pending trial are controversial ultranationalist lawyer Kemal Kerinçsiz, who has filed countless suits against Turkish writers and intellectuals at odds with Turkey's official policies, Fikret Karadağ, a retired army colonel, and Sami Hoştan, a key figure in the Susurluk affair.

Meanwhile, neo-nationalist lawyer Kemal Kerinçsiz, who is under arrest on suspicion of Ergenekon membership, in a statement he made through his lawyer yesterday demanded that the prosecutor withdraw the indictment and draft a new one with the testimonies of President Abdullah Gül, Prime Minister Recep Tayyip Erdoğan and former Chief of General Staff Gen. Hilmi Özkök, who was the armed forces chief at the time of the alleged coup attempts.