Turkish FM Babacan has indicated that their objective for Turkey-Russia relations was a multi-dimensional and intensified partnership. 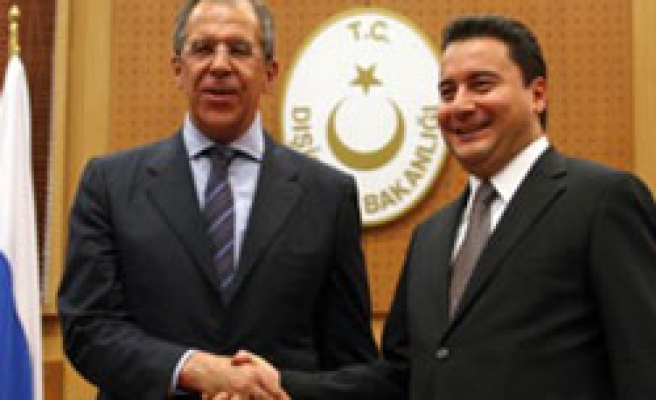 The foreign minister of Turkey has indicated that their objective for Turkey-Russia relations was a multi-dimensional and intensified partnership.

Ali Babacan met Foreign Minister Sergey Lavrov of Russia, who is currently in Ankara on a state visit. Following the meeting, the two held a joint news conference.

"Both sides have the necessary will to further improve the mutual relations. Turkey and Russia have considerable affinities in their approaches regarding international and regional issues. Our objective for Turkey-Russia relations is a multi-dimensional and intensified partnership," he said.

Upon a question about Turkey's mediation in Syria-Israel talks, Babacan told reporters, "the third round of talks between Israel and Syria started in Istanbul yesterday and they will end tomorrow. Any tangible progress in the indirect talks, in which Turkey acts as a go-between, can lay the groundwork for direct negotiations. But talks are still at a very early stage. We believe that a progress would be made after the both parties began to display political will and resolution for a solution."

Lavrov extended Russia's support to Turkey-mediated talks in which the parties are negotiating over the fate of the Golan Heights.

Upon a question, Lavrov said that U.S. plans for missile defense sites in Europe would also bring risk besides security. He said that there was no change in Russia's approach to the U.S. plan to set up a missile base in Poland and a related radar in the Czech Republic.

Lavrov thanked the Turkish government for erecting a monument in Gelibolu peninsula in northwestern Turkey out of respect to soldiers of Russian Tsar Nicolai II who fled from the Bolsheviks and took shelter in Turkey during the civil war in 1920 and 1921.

He reiterated Russia's commitment to support the process regarding the Cyprus issue.

Turkish foreign minister indicated that the two countries overcame the recent problem in Turkish exports of fruits and vegetables to Russia by signing a memorandum of understanding.

Meanwhile, Lavrov abide by the recently extended smoking ban in enclosed areas and smoked his cigarette outside the ministry building.

Following his meeting with Babacan, Lavrov was received by Turkish President Abdullah Gul.