The Turkish press had reported previously that Ahmadinejad would visit Turkey Aug. 14. 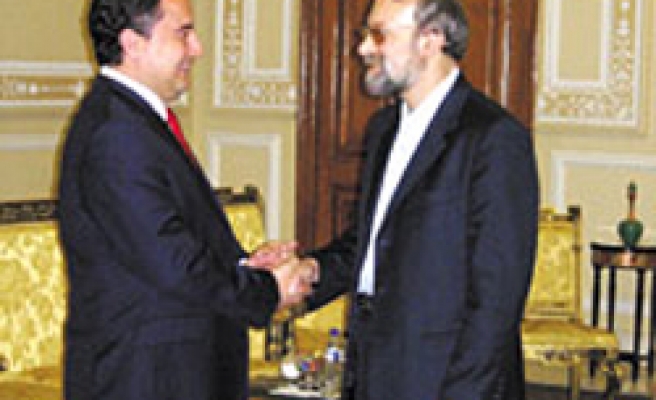 Babacan said on Wednesday that the problems of the region concerned both Turkey and Iran, adding he had the chance to assess such problems during his meetings with Iranian officials.

Speaking to reporters after his meeting with Iranian Parliament Speaker Ali Larijani, Turkish Foreign Minister Ali Babacan said that they exchanged views on regional and international matters during the meeting.

Turkey's EU membership process, operations waged against terrorists organization PKK, as well as the latest situation in Palestine and Iraq were also on the agenda of the Babacan-Larijani meeting, officials said.

"Turkey closely follows the process," Babacan said, stating that the country exerted efforts for the smooth continuation of the process, elimination of probable problems and prevention of misunderstandings.

"We believe that dialogue is the basic element for the solution of the Iran issue just like many other issues concerning the Middle East," Babacan said.

Upon a question on Iranian President Ahmadi-Nejad's upcoming visit to Turkey, Babacan said the parties would make a simultaneous statement regarding the schedule and content of the visit.

Commenting on the latest developments in Kirkuk as well, Babacan said, "We recommend all the parties to act with common sense. Because, Iraq needs stability. It is of great importance to act upon mutual agreement on issues related to Kirkuk".

Iranian President Ahmadinejad was expected to visit Ankara some time in August to support warming relations between the two countries.

Turkish diplomats said the exact date of the visit had not yet been determined and that they were still working on the details. Babacan also spoke about the planned visit before his own departure to Tehran, saying a date had not yet been set. The Turkish press had reported previously that Ahmadinejad would visit Turkey Aug. 14.

Following the press conference, Babacan departed from Iran for Turkey.