The Third National Program will decide on a timetable for the realization of the reforms in various field. 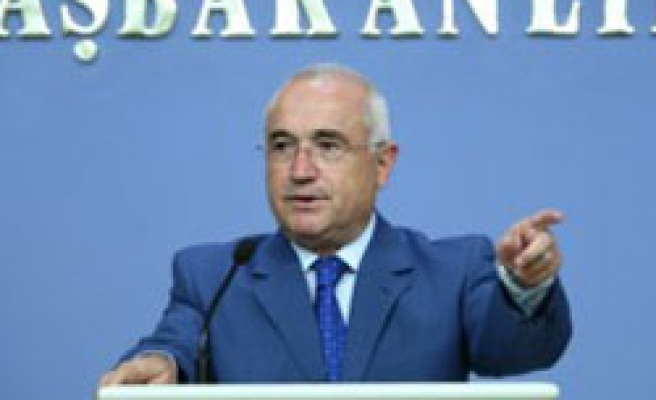 The Justice and Development Party (AK Party) government, which entered into a period of withdrawal due to presidential and general elections in 2007 and a closure case pressed against the party in 2008, has bounced back with a comprehensive European Union reform package.

The package, prepared by the Foreign Ministry and the EU General Secretariat (ABGS) is the draft of the Third National Program of Turkey. The program continues to be called a "draft" although it has already been discussed by the Cabinet because parts that include political commitments are yet to be discussed with opposition parties. The draft is 400 pages long and organized into four chapters. It envisages changing 131 laws and 342 bylaws and regulations.

Cabinet speaker and State Minister Cemil Çiçek, speaking to the press on Monday, said that the program will be brought to Parliament only after it takes its final form -- in other words, after it is shared and worked on by political party leaders and nongovernmental organizations. The package consists of a part of the 473 laws and regulations that need to be changed in order to address 33 chapters of the EU negotiation process. The package will cost Turkey 21.8 billion euros, out of which 20.4 billion euros will be spent by the Ministry of Environment and Forestry alone.

Approximately 13 billion euros of these 20.4 billion euros will be spent by the Ministry of Environment and Forestry in attuning the infrastructure of local administrations such as the drainage system, sewage, wastewater treatment centers and incineration plants. Through these transformative reforms, Turkey will bring the facilities of the entire country up to EU standards. Out of the 21.8 billion euros, 13.6 billion euros will be provided from Turkey's own resources. The remaining 8.2 billion euros are planned to be provided by EU funds.

The Third National Program necessitates important changes be made to the Constitution, but the bulk of the changes will be felt in daily life as most of the 131 laws to be changed relate to upgrading sectors ranging from animal husbandry to fighting pirated publications and from environmental protection to union rights. The program will decide on a timetable for the realization of these reforms.

Turkey's First National Program was prepared during the coalition government of the Democratic Left Party (DSP), the Nationalist Movement Party (MHP) and the Motherland Party (ANAVATAN) before the AK Party came to power in 2002. The AK Party government prepared the Second National Program in 2004, which boosted EU reforms. The AK Party is planning to repeat its performance in passing laws relating European Union reforms.

An important section of the national program is judicial reform. The program asks that the preparations for judicial reforms be completed by the end of 2008 and brought to Parliament as one of the last stages of the reform package. The judicial reforms will relate to the restructuring of the Supreme Board of Prosecutors and Judges (HSYK), the establishment of a union of judges and prosecutors, the passing of arbitration law on jurisprudential conflicts, amendments of the notaries law, the Turkish Penal Code (TCK) and, most importantly, the amendment of the Code on Criminal Procedure (CMK) so as to make decisions of the European Human Rights Court enforceable in Turkey.

Outstanding sections of the program

The national program introduces new legislation to ensure a transparent and effective administrative structure during the implementation of the reforms. It also introduces an Ombudsman law that establishes a public audit association. Another reform includes setting up a commission annexed to the Prime Ministry that will concentrate on increasing transparency in public administration.

Another new body envisioned under the new package will be a commission of political ethics. The Human Rights Administration of the Prime Ministry will also be restructured on the basis of the Paris Principles.

The package also introduces major changes to the Law on Political Parties to allow for more transparency in the financing of political parties and their activities.

The most significant changes in the program pertain to civilian-military relations, an issue frequently criticized by the EU. Legal changes that will ensure the audit of all Turkish Armed Forces (TSK) expenditures are part of this package.

The national program introduces changes that make investment decisions taken by the government to be implemented effectively so the administrative and bureaucratic obstacles in front of domestic and international investors are removed.

Under the program, regulations restricting foreign direct investment (FDI) which stems from the EU are to be removed. A new Turkish trade law would be implemented as soon as possible. In order to implement intellectual property rights, coordination among the security forces, customs officials and the judiciary would be reinforced. State subventions would be changed in accordance with EU rules. A committee would be established to oversee state subventions. An electronic communication law would be passed in accordance with EU regulations. A framework law would be passed related to food and veterinary issues in accordance with EU regulations. A central institution would be established to deal with all issues related to fishing. Railway laws would be established to make the Turkish railway sector compatible with that of the EU. Preparations would be started to be a party to the EU Energy Association Agreement.

Other changes envisaged to be made on relevant laws include a revision on the Code of Civil Procedures. In this way, the establishment of expertise will be rearranged. A law on the protection of personal data will be prepared and necessary steps will be taken to be party to the UNESCO Convention on Cultural Diversity. Parliament will approve a relevant protocol of the European court on preventing public institutions from discriminating against any individual. The United Nations Convention Against Torture and Other Cruel, Inhuman or Degrading Treatment or Punishment will be approved.

The law on assembly and demonstrations will be revised and its effective implementation ensured. The program also includes significant steps to improve the quality of lives of women and children. A bill envisaging extending a helping hand to children suffering from violence will be passed by Parliament.

Within the framework of Treasury reforms, the Third National Program will deal with the gray economy and fiscal evasion. The taxation policy on alcoholic beverages, tobacco and tobacco products, oil and other energy products will be decided in advance. Changes in the Private Consumption Tax Law, to be made in 2009, will affect taxation rates for these products.

The definition and scope of the Value-Added Tax (KDV) will be redefined by 2011 and the application of taxation during imports cease. Within the same period a ban on the import of used cars will be eliminated and gambling will be regulated according to EU criteria.

A particular area that busied lawmakers of the national program is the environment. The action plan prepared by the Ministry of Environment and Forestry includes several arrangements. The bylaw to actualize the action plan will be promulgated by 2011. Accordingly, companies that harm the environment will be financially accountable for their actions; waste electronic goods will be regulated and a collection system for used batteries will be established; the use to titanium dioxide, used in food and candy coloring, will be restricted; contamination caused by fertilizers used in agriculture will be regulated; waters open to swimming will be subject to regular quality controls and results will be made public.

The program also introduces the concept of an eco-label. This will provide for the introduction of environmentally friendly products. The program is still open to amendment on environmental issues. It refers to the Environment Strategy Document and National Waste Management Plan to be prepared by the Ministry of Environment and in most cases refers to the content of this plan, stating that all drainage and water treatment systems will be brought to EU standards.

Another important section of the national program concerns refugees, illegal migration and foreigners. The program ordains that an education academy to educate relevant public officials is to be established with input from the Security General Directorate, the Gendarmerie General Command and the Coast Guard Command.

The program also tries to address the incomplete parts of the Second National Program. One such case is the establishment of an independent Border Security Establishment by 2009. The third program ordains that a border security vocational school is to be established within the Police Academy so as to educate and train expert personnel to work in the new establishment.