There are three types of leftists in Turkey, and their positions regarding the Ergenekon investigation are closely connected to these positions, aAccording to Marxist Sungur Savran. 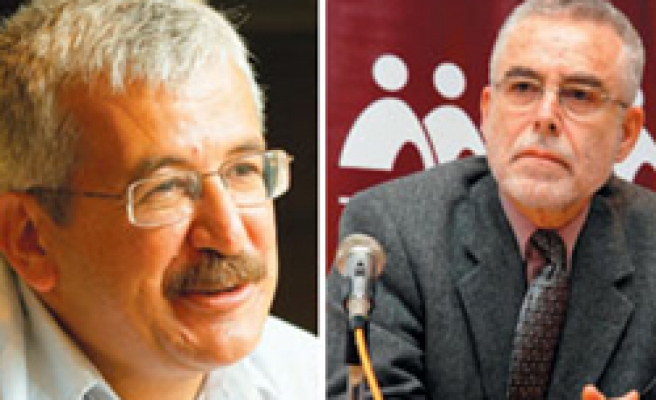 The Ergenekon investigation has triggered an animated discussion among the leftists of Turkey about their position regarding the deep state. In this self-critical discussion, the leftists accuse each other either of being supportive of coups d'état or being helpful to the ruling Justice and Development Party (AK Party), which some leftists see as being "democratic only for itself." ,

There are suggestions for a third option, too: not taking sides with either the AK Party or the coups.

Prominent leftist intellectual Professor Baskın Oran claims that the reason for this situation is the obsession of the left with secularism, while another professor, Mithat Sancar, thinks it is right to be suspicious of the AK Party but that the left should not make the mistake of not taking a side.

According to Marxist Sungur Savran, there are three types of leftists in Turkey, and their positions regarding the Ergenekon investigation are closely connected to these positions. The globalist left thinks history is a clash between the state and civil society, and that in Turkey the state is the main obstacle to the improvement of civil society. Savran states that for globalist leftists the guarantee of democracy is the European Union.

According to Savran, the second type is the nationalist leftist. These leftists believe the aim of globalization is to destroy the nation-state and that the US administration wants to destroy the Turkish Republic, which, in their view, is the best thing that could happen to Turkey.

Also in order to succeed, the US administration is trying to turn Turkey into a model of "moderate Islam" by using the AK Party. According to the nationalist left, the guarantee of the continuation of the republic is the military.

Savran cites the third kind of leftists as the Marxist internationalists, who think globalism is actually a competition among the nations. Their aim is the unification of all the working classes of the world, instead of unifying with the EU, which they consider an imperialist entity. Their focus is the class struggle.

Savran's classification of the left can be helpful in understanding the position of different leftists on Ergenekon. The globalist left strongly supports the Ergenekon investigation and wants to see it expanded. The nationalist left has a tendency to rationalize the actions of Ergenekon or at least to be very hesitant in taking sides on the issue, and the internationalist Marxist left has come out in opposition to both the AK Party and the coup attempts.

İsmet Demirdöğen, Ankara representative of the Taraf daily and an expert on the discussions within the left, says the main reason the left has not gotten involved in the matter is its distrust of the AK Party and its practices.

"To consider the beginning date of the Ergenekon gang as 2003 and not to mention the September 1980 coup is one of the major question marks about Ergenekon. On one hand there was an attempt at a coup d'état and on the other there was a real coup d'etat in 1980 in which 1.5 million were tortured, thousands had to flee the country, 53 were hanged and 650,000 were convicted," he states.

According to Demirdöğen, the left thinks it is not getting enough guarantees from the government to believe that this investigation will be extended because the AK Party does not have the courage or the intention to do so; for example, it is not doing anything to amend Article 15 of the Constitution, which protects the members of the National Security Council (MGK) who realized the 1980 coup from prosecution.

Sancar puts forward some existentialist questions, emphasizing the importance of the 1980 coup for the left. "The coup and its cruel system since Sept. 12 [1980] has been the main foundation and reference point of the left. The victim mythos, not only in the theories of the left but also in its literature and cinema, is the determining motivation," he says.

"Are the arrests of the coup planners triggering the fear from the loss of raison d'être in the subconscious of the leftists? For instance, perhaps the absolutely decisive role of the military in the political sphere has caused the left to put the blame of every political failure on the dragon that is believed to be invincible, thereby ridding itself of responsibility. If so, when this dragon was observed losing its influence, could this have triggered a panic within the left related to a re-assumption of responsibility for leftist politics? Or, what's worse, is there a possibility that in the conscious or subconscious of many leftists, the military, while being hated, is at the same time regarded as the eventual assurance for the continuation of the life to which they are accustomed? Is there a love-hate relationship between them?" Sancar questions.

Professor Oran proposes that the military pacified the left by using its obsession with secularism.

"The military recognized this obsession of the left on Feb. 27, 1997, and silenced the left the next day," he says, referring to the post-modern coup on Feb. 28, 1997, meant to prevent the alleged Islamization of the political system.

For the left, the fear that secularism is being threatened and its many questions about the AK Party led to it taking the position of "neither the coup nor the AK Party," in other words, not taking a side.

"The Turkish left thinks the Ergenekon investigation is basically a power struggle within the system and is not related to democratization. In the past it suffered much in scenarios of the elephant fight, the grass is torn up. Now, the Turkish left is not able to choose between the elephants," Demirdöğen says.

Ufuk Uras, İstanbul deputy and the leader of the Freedom and Solidarity Party (ÖDP), says there are many reasons for the hesitation of the left regarding the Ergenekon investigation but that the fundamental one is the weakness of the left in general.

"One cannot argue that the left is performing well in other areas but is crippled on the issue of Ergenekon. Currently the leftist movement is so weak that it cannot have much of an influence on the matter," Uras notes.

Sancar recalls that some leftists are trying to downplay the Ergenekon operation because they don't want to be perceived as allies of the AK Party. This is why they are expending most of their energy emphasizing that they are opposed to coups; meanwhile, the AK Party speaks all the time about the practical mistakes and violations of rights during the operations in order to convey that the result of the Ergenekon operation will not be an enhancement of democracy.

Sancar says he understands the left's suspicions regarding the Ergenekon operation, but that this does not mean it should stand back and not take a side. "To expect that during a power struggle in the system a part of the system will be able to take radical steps forward is absurd," he states, adding: "The real focus of the left should be taking advantage of the opportunity to confront the past regardless of who was guilty of what. And this does not mean being blind to the insincerity of the AK Party or ignoring social problems."

Uras suggests that the left must struggle against the neo-liberal policies of the AK Party and also the coup attempts. Oran, however, is not hopeful for the future of the left in the short term. He says the hesitation of the left regarding the Ergenekon investigation will cause the already weak left to reach its weakest point. "Only after experiencing the utmost disgrace will the left have the impetus to improve."