The daily Taraf has called on all its readers to file a complaint with the Supreme Court of Appeals against its chief prosecutor for filing a closure case against the ruling Justice and Development Party (AK Party) on "fabricated" grounds. 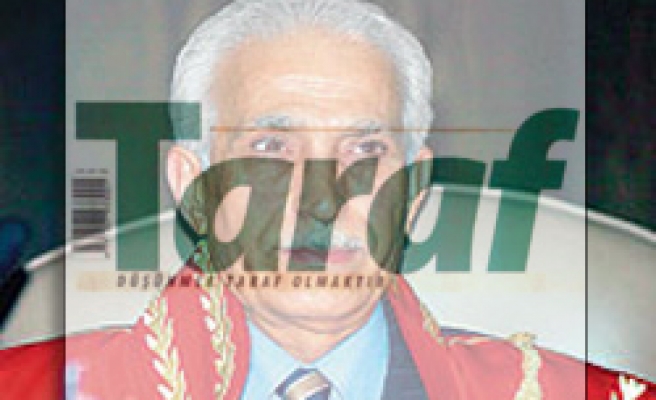 The newspaper published a sample petition in yesterday's issue and informed its readership that they could appeal to the First Chairmanship Board of the Supreme Court of Appeals, making a legal complaint against Chief Prosecutor Abdurrahman Yalçınkaya on the grounds of professional misconduct.

"Chief Prosecutor of the Supreme Court of Appeals Abdurrahman Yalçınkaya resorted to fabricating evidence for the lawsuit he filed with the Constitutional Court against the AK Party, claiming that it has become 'the center of anti-secular activities.' He presented as evidence against the party the statement of a defendant in a case that was opened in connection to the murder of Mustafa Yücel Özbilgin, a member of the Council of State, whose reasoned verdict has not even been written. Yalçınkaya thus made his judgment about the case before even reading the related documents, and therefore committed professional misconduct. We respectfully demand that all the necessary legal steps be taken concerning him," read the text of the sample petition.

Taraf also questioned whether the Council of State murder committed in 2006 by Alparslan Arslan had been planned so that a closure case could be opened against the AK Party, while recalling that the connection between the murderer and the Ergenekon terrorist organization had been revealed the day the murder was committed.

The newspaper also noted that the court dealing with the murder case opened against Arslan turned a blind eye to all the tangible proof -- such as a picture taken in Switzerland showing Veli Küçük, the suspected leader of Ergenekon, and Arslan together -- in addition to disregarding the fact that the bomb used in an attack on the daily Cumhuriyet masterminded by Küçük and hand grenades seized in an Ümraniye house raid belonged to the same series.

"None of this evidence was brought up during the trials, and the case has been concluded after the rejection of a request for an investigation in relation to the newly found conclusive evidence. Now the reasoned verdict is being written and it will be submitted to the chief prosecutor of the Supreme Court of Appeals, with all the recently found evidence disregarded," Taraf wrote.

The daily also noted that Yalçınkaya had been carefully chosen, explaining that he was appointed chief prosecutor last year by former President Ahmet Necdet Sezer, although he received the second-highest number of votes. Sezer had previously appointed him deputy chief prosecutor after he, again, won the second-highest number of votes in an election by members of the Supreme Court of Appeals.