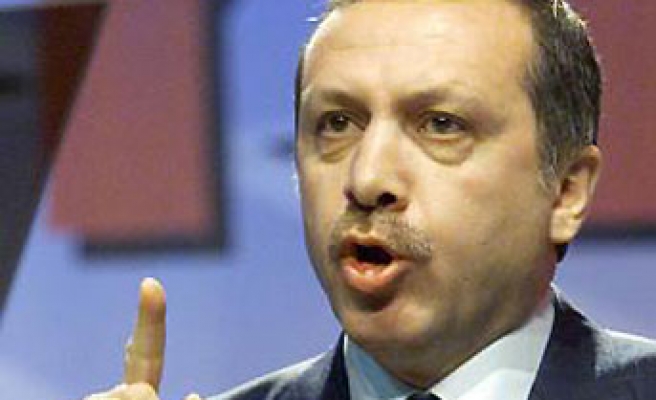 "Unity, togetherness, solidarity, these are the things we need most. We can overcome many problems so long as we treat each other with love," Erdogan said without making any direct reference to the standoff.

"Turkey is growing and developing very fast ... We must protect this atmosphere of stability and tranquility," he said. Under Erdogan, Turkey has posted strong economic growth after years of weak coalition governments and corruption.

His speech was recorded on Saturday, a day after the army threatened to intervene in the presidential poll process. The army, which sees itself as the guardian of Turkey's secular system, has ousted four governments from power since 1960.

Erdogan's ruling AK Party has named Foreign Minister Abdullah Gul as its presidential candidate and he has refused to stand aside. Parliament, in which the AK Party has a big majority, elects the president in predominantly Muslim Turkey.

Turkey's financial markets have tumbled. Investors took fright at instability sparked by a court challenge to the presidential poll, a mass anti-government rally of up to one million people on Sunday and the army's threat.

But Erdogan's party, buoyed by the support of the European Union it seeks to join, has shown unprecedented defiance of the powerful military.

Turkey's Constitutional Court began on Monday to examine an opposition request to suspend the presidential poll, a decision that would trigger early parliamentary elections. In the view of many analysts, this would help defuse tensions.

The court has said it will try to issue its verdict by Wednesday, when parliament is due to hold a second round of voting on Gul's candidacy. Gul is not expected to win the presidency until the third round on May 9.

The leader of Turkey's staunchly secularist main opposition CHP, Deniz Baykal, called on Monday for an anti-government alliance among all opposition parties and accused the AK Party of riding roughshod over people's concerns about secularism.