Turkey - Police fired tear gas canisters Tuesday to prevent hundreds of leftist protesters from marching to Istanbul's Taksim square to mark the 30th anniversary of a deadly May Day rally and detained more than 100 demonstrators. 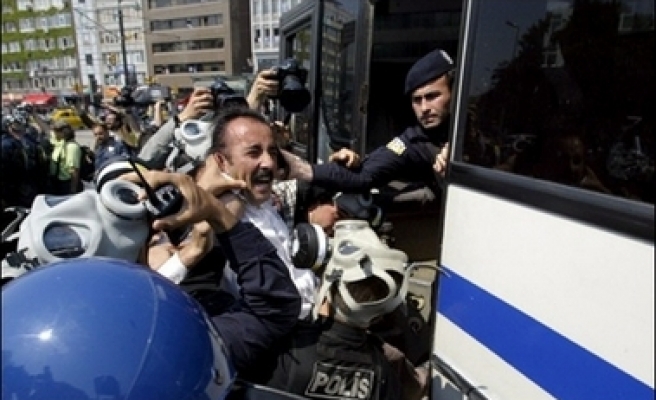 Authorities declared the area off limits to protesters but allowed a handful of union leaders to lay red carnations at the square, where unidentified gunmen opened fire on tens of thousands of demonstrators during a May Day gathering in 1977. The incident left 34 people dead, most of whom were killed in a stampede.

Officials had shut down 41 schools in the area for the day, anticipating clashes with protesters or members of outlawed leftist groups who often clash with police during May Day rallies in Turkey.

Authorities were not allowing live broadcasts from the square and ordered TV trucks not to set up their satellite dishes. A television crew from CNN-Turk, however, managed to air footage through a portable satellite from the third floor of a building overlooking the square.

Around 3,000 riot police, reinforced with armored personnel carriers, were seen on guard in the square as snipers took positions on rooftops, CNN-Turk footage showed.

Police blocked several roads in downtown Istanbul as part of their security measures, causing a traffic jam that forced the Istanbul stock market to start trading later than usual.