A 34-year-old man who opened fire during a clash between student groups of opposing ideologies at Akdeniz University on Sunday is still on the loose, but six police teams are working to capture him. 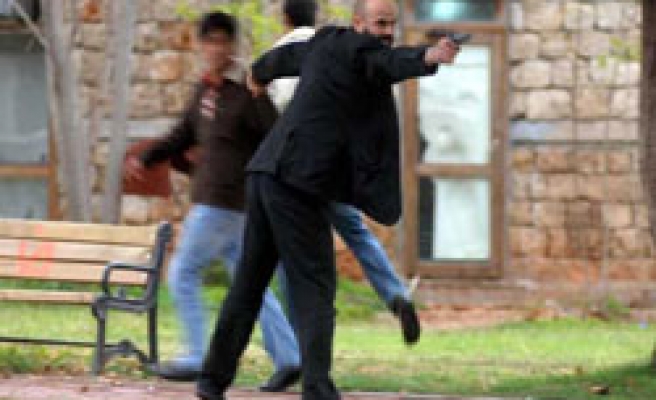 Today's Zaman reported a 34-year-old man who opened fire during a clash between student groups of opposing ideologies at Akdeniz University on Sunday is still on the loose, but six police teams are working to capture him, officials said on Tuesday.

Another individual, Tahir K., who fired shots into the air during the clashes with a gun filled with blanks, was captured and taken into police custody on Monday. Officials said on Tuesday he was taken to the anti-terror department of the Antalya Police Department for interrogation. Four more guns containing blank cartridges and sharp objects were located during a search of his home, police said.
Forty people have been detained by the police so far as part of an investigation into the skirmish between student groups of differing political opinions at a dorm of Antalya's Akdeniz University on Sunday. The clashes, the result of tension that had increased in the preceding days according to campus residents, alarmed Turkey as they brought to mind the memories of the 1980 coup.

The police said they were looking for 10 or 15 more individuals who were involved in the conflict and later identified by police through video footage of the clashes as people who are not students at the university. Officials also said the Antalya Prosecutor's Office was reviewing all footage recorded over the weekend by security cameras across the campus. Six teams specifically formed by the anti-terror department to investigate the incident continue to search for the suspects as well as one of the two shooters, identified as Ömer Ulusoy (34), shown in footage firing into the air, who stands out from the rest of the students in the clash as he appears to be much older.

Breaking up the incident

Campus residents say the history of the weekend's incidents, in which 40 were detained and seven injured, date back to about one-and-a-half months ago when a fight broke out between right and left-wing student groups outside the school. The students involved were all residents of a dormitory of the Student Loans and Dormitories, a state agency. Two students were injured in the brawl. Last month, complaints were filed against 10 students from both groups regarding that fight. Witnesses say Sunday's clashes, which came after tension between the conflicting groups reached a peak over the past three days, were a continuation of the original fight between the students.