Turkish police will get 'more authority'

The bill that has been waiting on the shelf for months and that increases the authorities of the police extraordinarily has been brought up on the national assembly's agenda. 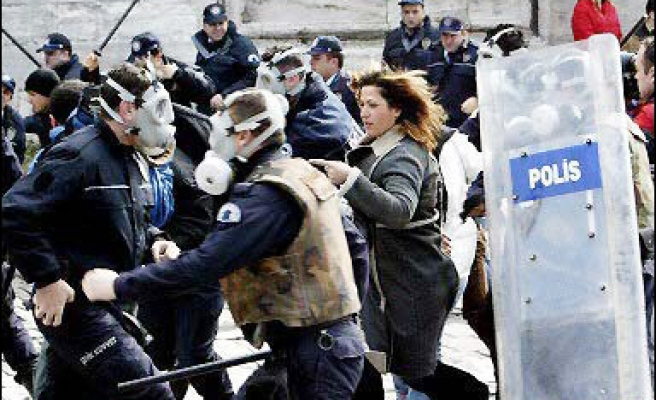 AK Party submitted the suspended bill to the assembly speakership.

The law is expected to be enforced before the election. The bill on the shelf for a long time has appeared on the agenda of the assembly after the attacks in Ulus.

The police department was calling for the law to be issued for a long time.

With the enforcement of the law, nothing will happen without the permission of the police.

Turkey is quitting the democratization steps for conformity to the EU.

The bill that has been waiting on the shelf for months and that increases the authorities of the police extraordinarily has been brought up on the national assembly's agenda.

According to the amendments that AK Party plans to make before the election, police will bug on everyone, watch everyone and enter any house it wants.

As countries move toward increasingly strict counterterrorism legislation based on individual experiences, such as the Sept. 11 terrorist attacks or the London 7/7 bombings two years ago, the debate on whether to extend the authorities and powers of the police force has re-emerged on the Turkish political scene following a lethal attack in downtown Ankara earlier this week. Yesterday two deputies proposed a new bill introducing extensive powers for the police.

The proposal comes three days after the terrorist attack, blamed on the outlawed Kurdistan Workers' Party (PKK), hit the capital last Tuesday, when a suicide bomber detonated the explosives on his body in front of a commercial center in Ulus, a busy downtown area. Six people were killed while nearly 100 others were injured in the explosion.

The bill envisages making it obligatory to take the fingerprints of anyone applying for a gun license, driving license, passport or Turkish citizenship. The bill also endows the police with a larger authority on stopping, searching and demanding identification from individuals. According to the bill the police will be able use anyone to collect information. If passed, the bill will have given the police force the largest authorities in its history.

The Ulus explosion pulled the plan to extend the security forces' powers to fight terrorism from the shelf and brought it back to the table, with top figures in politics stating the need to up counterterrorism measures due to a recent surge in terrorist attacks. These concerns are added to by the increasingly uneasy situation in northern Iraq, which Turkey fears might motivate the ethnic separatist terrorist group PKK to become more aggressive in its violent campaign, with members infiltrating Turkey via the Iraqi border.

In the immediate aftermath of the explosion, Chief of General Staff Gen. Yaşar Büyükanıt pointed to foreign supporters of the PKK, saying one should look at "who feeds the terrorists." Recently Büyükanıt slammed Iraqi Kurds as the biggest supporters of the PKK and later called for a cross-border operation into northern Iraq to hit their bases there, a possibility Prime Minister Recep Tayyip Erdoğan did not rule out in a televised interview he gave one day after the attack. He said at the time that Parliament would give the authorization for such an action if the military requested it.

Speaking in an interview with private NTV, Foreign Minister Abdullah Gül, who also chairs Turkey's Higher Counterterrorism Board (TMYK), said yesterday that the government and Parliament were ready to support any measure that would bring successful results in the fight against the PKK, when asked whether the government would support a military operation into northern Iraq.

The PKK, which has mountain bases northern Iraq, denied responsibility for Tuesday’s attack, but authorities say the methods and the A-4 explosive used matched PKK methodology. Security forces on Wednesday also detained a man and a woman possessing five kilograms of explosives in the southern city of Adana, who were proven to be members of the terrorist group.

Gül in his televised interview said the terrorist organization used other groups in some attacks to avoid public feelings of hatred, adding that the attack in Ulus looked like such a case. Gül also expressed concern that the current chaos in northern Iraq was making Turkey’s job more difficult in its fight against terrorism.

Gül dismissed any difference with the military on the anti-PKK fight and said the government and the General Staff took the same approach towards the issue. He also voiced slight criticism of the US, implying that he would like to see more of cooperation from Turkey’s largest ally.

In response to a question on how long Turkey would wait before it ran out of patience, he answered: “We have already run out of patience, but there is time for everything. Certainly preparations, planning, a decision ... These are things which our responsible authorities are well aware of,” Gül replied. The foreign minister said Turkey was determined to take some sort of an action based on the recommendations of counterterrorism experts.

The bill envisaging amendments to the Law on Duties and Authorities of the Police drafted by Justice and Development Party (AK Party) Sivas deputy Selami Uzun and a group of other deputies was presented to the Parliament Presidency.

The legal ground of the motion bill recorded that the articles of the present Law on Duties and Authorities of the Police were insufficient compared to the EU standards, and thus new authorities were needed.

The bill includes granting the police larger-than-ever authorities in order to boost their ability to prevent further crimes.

* They will be able to use force against the people and vehicles that don’t stop upon order.

* The use of force will be possible considering the degree and content of the resistance without a prior verbal warning.

* Taking measures including the use of guns will be among the phases of using force.

* They will also be able to take those rejecting to expose their identities into custody.

* The fingerprints of those applying for any sort gun license, driving license, passport, Turkish citizenship, the post of law-enforcement officer, the post of private security guard, those demanding to be granted political asylum, the incoming foreigners if need be, and of those taken into custody will be taken.

* The fingerprints and photographs to be kept by the Police Department will be deleted 10 years after the owner’s death, and 80 years after being stored in the system.

* The information stored in the system will be used by courts, judges, public prosecutors and law-enforcement officers.

* They will be able to conduct a preventive search on individuals’ private papers and belongings with a prior permission of the district official.

They will also be able to conduct preventive searches in and around the places where public meetings and rallies, the executive board meetings of syndicates and professional organizations are being held, where people gather in large numbers, educational institutions, in public places, and on any sort of mass transportation vehicles and personal cars.

If a delay in the search poses any possible future risk and danger, the police will be able to conduct an immediate search on anything with the permission of the district official.

* To this end, they will be able to obtain information from anyone