'Indictment, sent to Turkey's Constitutional Court on Friday evening, marks the latest shot in a long-running feud between the fiercely secular elite, which includes judges and army generals, and the religiously-minded government' said Reuters. 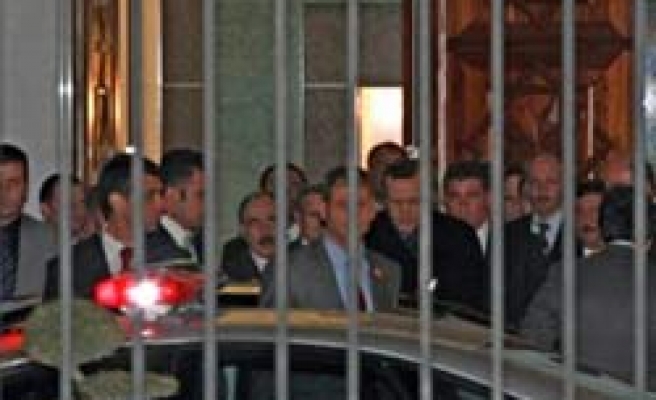 State prosecutors demanding the closure of Turkey's ruling AK Party accuse it of trying to turn the country into an Islamic state, according to the text of their indictment quoted on Saturday by Turkish media.

The 162-page file, sent to Turkey's Constitutional Court on Friday evening, marks the latest shot in a long-running feud between the fiercely secular elite, which includes judges and army generals, and the religiously-minded government.

The prosecutors' move has raised investor fears of possible political and economic instability in Turkey, a European Union candidate, though a final court verdict may take many months.

The centre-right, pro-business AK Party denies any Islamist agenda and has presided over strong economic growth and EU-linked political reforms since sweeping to power in 2002. It resoundingly won a fresh four-year mandate in last July's polls.

'INDICTMENT AN ATTACK ON DEMOCRCY'

The party has said the indictment is an attack on democracy and Turkey's national interests and has vowed to fight it.

"They (the prosecutors) are not thinking about the country," Prime Minister Tayyip Erdogan was quoted as saying in his first public comment on the indictment on Saturday.

"I think this case will usher in a new era in Turkish politics. Political parties will no longer suffer from anti-democratic practices," said Justice Minister Mehmet Ali Sahin, suggesting the AK Party would win the legal battle.

The indictment calls for Erdogan, President Abdullah Gul and scores of other senior AK Party officials to be banned from politics for five years.

It also criticises the new head of YOK, the body that supervises Turkish universities, for backing constitutional amendments sponsored by the government aimed at easing a ban on women students wearing the Muslim headscarf at university.

The Constitutional Court is currently weighing an appeal from the main opposition Republican People's Party (CHP) to rule the headscarf reform contrary to secularism and thus illegal.

Secularists, who dominate the judiciary, the armed forces and universities, view the headscarf as a symbol of political Islam and thus a threat to the separation of state and religion established by the republic's revered founder Kemal Ataturk.

'HEADSCARF IS A MATTER OF RELIGIOUS FREEDOM'

Erdogan says the headscarf is a matter of religious freedom.

The secularist CHP said on Saturday the prosecutors were just doing their job in trying to shut the AK Party, but liberal commentators -- including those critical of the AK's recent heavy focus on the headscarf -- said banning parties was wrong.

"I find this attempt to close the ruling party totally wrong because it was elected (in last July's parliamentary polls) with 47 percent of the vote," said Hasan Cemal in the Milliyet daily.

"Political stability will be harmed. Whenever a party is closed in Turkey, it has blocked the way of Turkish democracy."