Turkey's leading unions will relaunch a mass demonstration against the IMF-sought social security reform bill in Istanbul on Sunday. 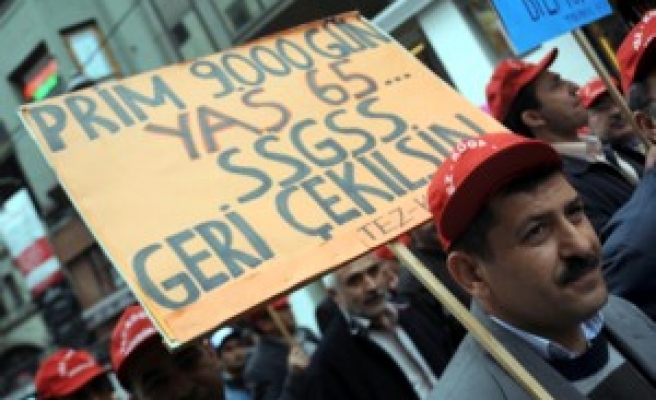 Turkey's leading unions will relaunch a mass demonstration against the IMF-sought social security reform bill in Istanbul on Sunday after the demonstrations on April 1, Turkish daily Hürriyet reported.

Unions are demanding the bill be withdrawn, despite the amendments.

The Revolutionary Labour Unions Confederation (DISK), Confederation of Public Employees Labour Unions (KESK), Union of the Chambers of Turkish Engineers & Architects (TMMOB), Turkish Medical Association, and the Turkish Dentists Association will join the protests in Kadikoy, a distinct of Istanbul, which starts at 2.00 p.m. (GMT 1100)

On April 1 the unions launched two-hour warning strikes as a protest against the bill for the second time in a month.

The government and unions reached consensus on some portions of the bill after the debate was opened in Parliament on March 27, including a figure of 7,200 working days needed for blue-collar workers to reach retirement.

But no agreement was reached on a one key part of the package, more closely followed by financial markets and the International Monetary Fund, to raise the retirement age to 65.