Turkmenistan demolished a maximum-security prison known for holding political opponents of the previous government on Wednesday, in a ceremony designed to showcase its commitment to liberal reform. 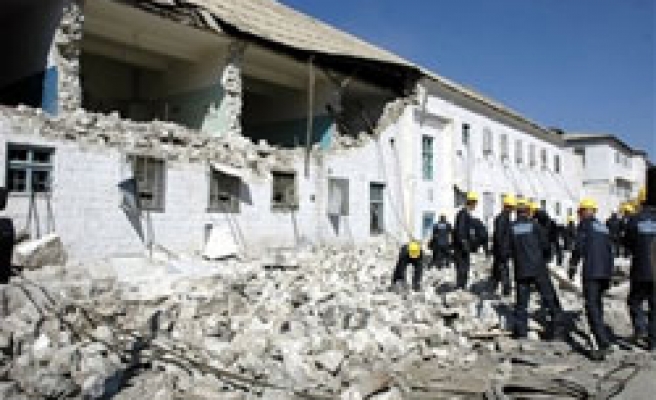 As the demolition got under way in the Caspian Sea port of Turkmenbashi, U.S.-based Human Rights Watch reported the authorities had arrested an exiled Turkmen dissident on his return to his homeland this week.

President Kurbanguly Berdymukhamedov came to power in late 2006 after the death of his absolutist predecessor, Saparmurat Niyazov, who locked up many of his political opponents during his 21-year rule -- some in Turkmenbashi prison.

On Wednesday, bulldozers with portraits of Berdymukhamedov on their windshields knocked down the jail in front of top Turkmen officials and foreign diplomats -- a move symbolising the country's break from its past.

"Due to the decline in crime rate this institution has become redundant," Interior Minister Orazgeldy Amanmyradov told reporters at the specially arranged ceremony. "The current president is overseeing drastic changes."

Since he came to power, Berdymukhamedov has vowed to liberalise Turkmenistan -- Central Asia's top gas exporter -- and has amnestied many prisoners sentenced under Niyazov.

During his long rule, Niyazov called himself Turkmenbashi, or Head of All Turkmen, and renamed streets and cities -- such as the port of Turkmenbashi -- after himself.

Human Rights Watch said Gulgeldy Annaniyazov, a former political prisoner who has lived in exile in Norway since 2002, was arrested after returning home on Tuesday.

Turkmen officials and Annaniyazov's family could not be reached for comment. It was unclear why he was arrested. The rights group said in a statement he decided to come back "to improve (Turkmenistan's) education and public health systems".

Turkmenbashi prison, built in 1949, was famous for its tiny three square metre (yard) cells. One of its most prominent inmates, former chief mufti Nasrullah ibn Ibadullah, was jailed in 2002 after Niyazov accused him of staging a plot against him.

Berdymukhamedov pardoned ibn Ibadullah last year and named him a member of the State Council on Religions.