The seismic makeup of the Marmara region makes earthquakes inevitable. 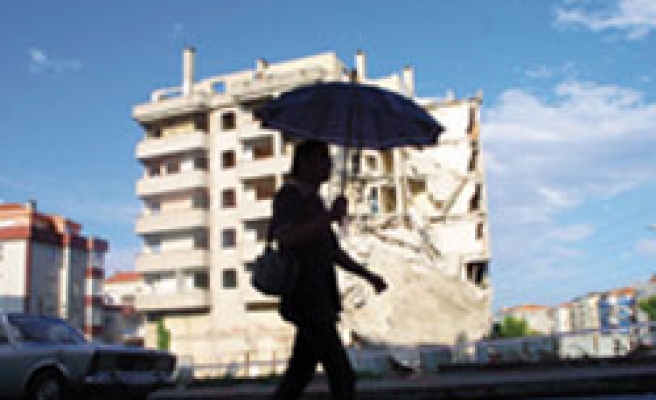 The effects of an earthquake that devastated Turkey on Aug. 17, 1999 both in terms of the high death toll and the financial strain it put on the country linger on, and experts say billions of dollars are necessary to cover the damage of a possible future earthquake in the Marmara region.

The seismic makeup of the Marmara region makes earthquakes inevitable. Strong earthquakes hit the region in 1943, 1957, 1967 and most recently in 1999, leading experts to expect significant seismic activity to reach a zenith every 30 years on average.

Chamber of Mechanical Engineers (UCTEA) chairman of the board of directors Emin Koramaz, speaking with Sunday's Zaman, said that according to the Turkish Industrialists and Businessmen's Association (TÜSİAD), the total cost of an earthquake would be $17 billion. The State Planning Organization (DPT) estimates this figure at $15-19 billion and the World Bank at $12-17 billion.

UCTEA released a report last week, titled "Earthquake Reality," highlighting earthquake statistics in Turkey along with policy prescriptions. According to Koramaz, 93 percent of Turkey, 98 percent of the Turkish population, 98 percent of industrial institutions and 95 percent of dams are located in along fault lines and earthquake-prone areas. Of the country's 1,001 power plants, 419 are situated on fault lines of first-degree danger. Koramaz noted that 80 percent buildings that are damaged during earthquakes are unregistered and not built according to building codes.

At 3:02 a.m. local time, İstanbul and its adjacent regions were struck by a magnitude 7.4 earthquake that killed thousands of people and caused billions of dollars in financial and infrastructural damage. According to official figures, 17,840 people died, 43,953 were wounded and 505 were permanently disabled. In terms of infrastructure, 285,211 residences collapsed and 42,902 offices were damaged. Unofficial reports suggest as many as 50,000 had died and 100,000 were wounded. They estimate that the collapse of 133,683 buildings made roughly 600,000 people homeless. Approximately 16 million people were affected by the earthquake in one way or another. Over 147,000 still live in provisional residences.

Nine years have passed, but few initiatives have been taken to prevent damage in future earthquakes. According to Boğaziçi University's Kandilli Observatory Earthquake Research Institute Director Gülay Altay, measures taken so far are not enough. "Progress has been made since 1999. Scientific research at universities, coordinated by the government, is taking place. However, we think it is inadequate. People need to be made more aware of what to do during and after an earthquake," she said.

Justice and Development Party (AK Party) Yalova deputy İlhan Evcin, speaking with Sunday's Zaman, said that a new bill on the establishment of an earthquake research commission has been prepared and submitted to Parliament. "Yalova has since Aug. 17, 1999 been undertaking serious efforts to minimize the damage in the event of an earthquake. Many projects have been completed and many buildings seismically retrofitted. The main cause of the earthquake damage [seen in the 1999 earthquake] was unregistered buildings and structures that did not meet building codes. To address these problems, we decided to establish a building inspection commission. It will be formed in October and work to prevent major earthquake damage," he said.

After the Aug. 17 earthquake, a compulsory earthquake insurance law was adopted, but inspectors still claim that buildings are being built with low quality materials and do not meet safety standards. Experts say the state should tightly control construction while the people should be informed and prepared for the aftermath of a strong earthquake.

The 1999 earthquake led to 2,100 lawsuits against building contractors. Nearly 1,800 of them were dropped due to what is known as the "Rahşan Amnesty." Then Democratic Left Party (DSP) Deputy Chairwoman Rahşan Ecevit, the wife of then-Prime Minister Bülent Ecevit, was influential in having the government give this amnesty. Of the remaining 300 lawsuits, 110 ended in sanctions against contractors. The remaining lawsuits were dropped for exceeding the statute of limitations.

Today, the ninth anniversary of the 1999 earthquake, will see a variety of memorial events countrywide. Sponsored by the Kocaeli Metropolitan Municipality, a new film, soon to be released, will serve as a memorial to those who died in the disaster. Producer Sami Dündar, one of the survivors, was saved after being trapped under rubble. The movie is expected to open in cinemas in March 2009.