TV kidney competition was a hoax

A Dutch TV contest which purported to show a dying woman choose a patient to receive her kidneys was a hoax. 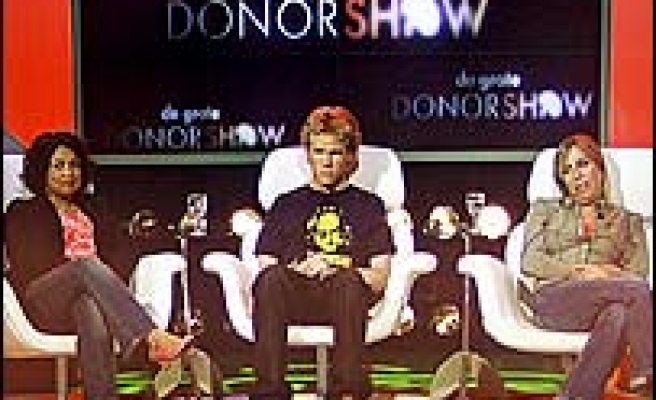 The "donor" in the show was in fact an actress - though the three people vying for an organ were real patients in need of a kidney transplant.

The three knew that The Big Donor Show, which aired on Friday, was not real. The producers say it was made to highlight the shortage of Dutch donors.

Before the hoax was revealed, the show had attracted widespread criticism.

"We are not giving away a kidney here, that is going too far even for us," presenter Patrick Lodiers said at the moment when the fake donor was apparently about to reveal her choice of patient.

The 37-year-old "donor", identified only as Lisa, was to make her choice based on the contestants' history and profile, and conversation with their family and friends.

Earlier, Lisa had said that it felt like playing God. "Think of it as playing Santa Claus," replied the presenter.

Viewers were invited to send in their advice by text message during the 80-minute show.


"We have only done this cry for help because we want to solve a problem that shouldn't be a problem," a producer told a news conference after the show.
Dutch Education Minister Ronald Plasterk hailed the show as a "fantastic stunt".

Caroline Klingers, a kidney patient who was watching the programme at a treatment centre in the town of Bussum, also praised it.

"It's good for the publicity and there are no losers," she said.

Earlier in the week Dutch Prime Minister Jan Peter Balkenende had criticised the programme, saying it could damage the reputation of the Netherlands.

There were calls from lawmakers to ban the show and Dutch embassies received complaints about it.

But Mr Lodiers said it was "reality that was shocking" because about 200 people die each year while waiting for a kidney in the Netherlands, and the average waiting time is more than four years.