A collection of valuable tiles stolen in İstanbul and later seized in London were returned to Turkish officials on Wednesday. 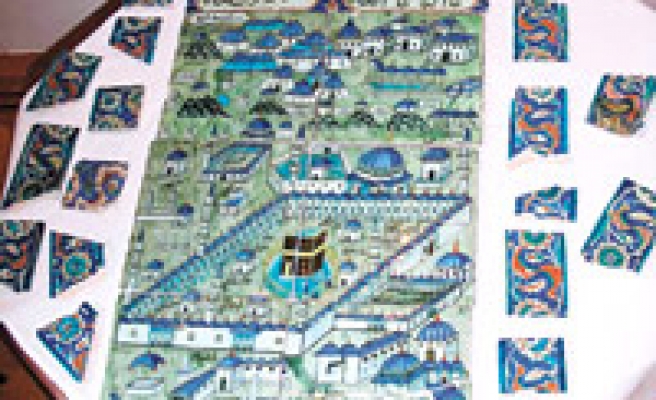 Today's Zaman reported a collection of valuable tiles stolen in İstanbul and later seized in London were returned to Turkish officials on Wednesday.

The tiles were stolen from the Cezeri Kasım Pasha Mosque and other historic buildings in İstanbul between 2002 and 2005 and were recently seized by the London Metropolitan Police's Art and Antiques Unit following a three-year investigation. The tiles, some of which date back to the 18th century, were handed over to Turkish officials at the Turkish Embassy in London with a ceremony held on Wednesday afternoon.
Among the retrieved items are three groups of tiles which make up an image of Islam's holiest shrine, the Kaaba in Mecca. Two further groups of tiles dating from the 16th century are also among the collection. During the ceremony, Turkish Ambassador to London Yiğit Alpogan expressed his happiness over seeing that Turkish historic tiles being returned to the land in which they belong. "The smuggling of historic tiles is a major international crime perpetrated by international gangs and illegal organizations. International powers fighting against such crimes should be in collaboration with one another against these illegal formations," he said.

Stressing that the cooperation between the UK and Turkey has gained a new aspect with the returning of Turkish historical tiles to Turkey, Alpogan said he hopes the cooperation between the two countries will further strengthen in the future. "British authorities proved their determination in their fight against smuggling. It is the duty of all humanity to protect and transfer such historic tiles to future generations," he added.

Nigel Moore from the Metro-politan Police Economic Crime Directorate noted that he was delighted to have contributed to efforts to return the Turkish tiles to Turkey. "We are open to cooperation with other countries in the fight against smuggling," he said. "Our country is like an open-air museum. Heavy responsibility falls on us to protect and pass on our historical richness to future generations," said Aydın Seçkin, from the Directorate General of Foundations, noting that his directorate is responsible for the protection of around 18,500 historic tiles in Turkey.