Ukraine's feuding president and prime minister agreed early Sunday to hold an early parliamentary election on Sept. 30, defusing a crisis that threatened to escalate into violence. 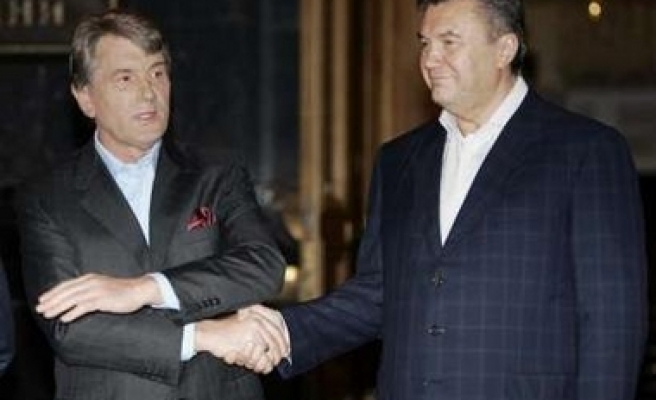 Ukraine's feuding president and prime minister agreed early Sunday to hold an early parliamentary election on Sept. 30, defusing a crisis that threatened to escalate into violence when the president sent troops streaming toward the capital.

"We found a decision, which is a compromise," President Viktor Yushchenko said after emerging from eight hours of tense talks. "Now we can say that the political crisis in Ukraine is over."

Tensions had been growing since April, when Yushchenko ordered the dissolution of parliament, where Prime Minister Viktor Yanukovych leads the majority coalition. The president claimed the premier and his supporters were trying to usurp presidential power. Parliament defied the order, calling it unconstitutional

The president summoned thousands of troops to Ukraine's capital Saturday, but forces loyal to the nation's prime minister stopped them outside Kiev.

Analysts said Yushchenko's move was an attempt to pressure Yanukovych to agree on an early date for new parliamentary elections, rather than a sign he was preparing for violent confrontation.

In the hours-long talks, Yushchenko had sought new elections as early as possible, demanding them held first in May, then in June. Yanukovych wanted them no earlier than the fall.

Yushchenko took control earlier in the week of the 32,000 troops who answer to the interior minister, a Yanukovych loyalist. A statement on the presidential Web site said that Yushchenko ordered the troops to Kiev in a move "necessary to guarantee a calm life for the city, to prevent provocations."

The statement did not specify how many troops were sent. Nikolai Mishakin, their deputy commander, said on Ukrainian television that nearly 3,500 were prevented from entering Kiev. He promised his troops would not turn back, but vowed they would not resort to violence since none had firearms.

Yushchenko, however, denied that he had sent additional interior troops to the capital, calling such reports "great stupidity" and "misinformation." Yushchenko said he had only ordered 2,000 troops to Kiev to maintain order during weekend festivities, a move he described as routine.

Kiev residents are celebrating the capital's anniversary this weekend and a major soccer game is planned for Sunday.

Several hundred flag-waving supporters of both leaders held competing rallies in front of the presidential office where Yushchenko and Yanukovych were meeting. A thin line of police separated the two camps of protesters.

Yanukovych said he, Yushchenko and other senior officials and politicians who took part in the negotiations agreed that the country cannot be allowed to slide into violence.

"We will do everything so that this doesn't happen again," Yanukovych said.

Yushchenko came to office in 2005 after the popular uprising known as the Orange Revolution broke out in reaction to Yanukovych being counted as winner of a fraud-plagued presidential ballot. The Supreme Court annulled that vote and Yushchenko won a rerun.

Yushchenko was poisoned with dioxin, which badly scarred his face, in the course of the race, and the mystery of who might have done it, and why, has never been solved.

He has sought to lead Ukraine into the European Union and NATO but his agenda has since been complicated by chronic political turmoil, including fighting among his supporters and the ongoing disputes with Yanukovych, who wants to preserve the country's close ties with Moscow.

On Thursday, Yushchenko fired longtime foe Prosecutor General Svyatoslav Piskun — a Yanukovych ally — saying Piskun could not serve as the country's chief prosecutor while acting as a member of parliament.

Security officers were sent to oust Piskun, but riot police loyal to Yanukovych immediately moved to protect him, standing guard outside his office.

"I think these maneuvers with security forces are meant to give the president a chance to maneuver at talks," said Vadim Karasyov, head of the Kiev-based Institute on Global Strategies.
Last Mod: 27 Mayıs 2007, 13:14
Add Comment