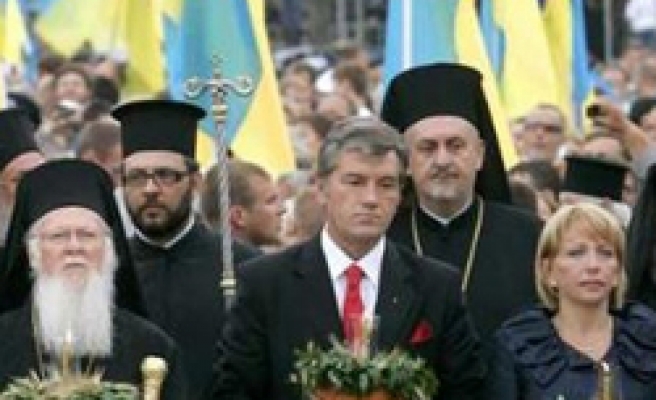 President Viktor Yushchenko appealed on Saturday to the world's top Orthodox spiritual leader, based in İstanbul, to let Ukraine have its own church free from Russia, and the patriarch suggested he was ready to consider this.

Yushchenko and Patriarch Bartholomew, head of the Greek-Orthodox Church of Fener-İstanbul, spoke at a prayer meeting at festivities marking the 1,020th anniversary of Orthodox Christianity in the region.

An independent Orthodox church was formed in Ukraine after the 1991 collapse of Soviet rule, but it remains unrecognised by the world-wide Orthodox church. The Ukrainian branch of the Russian Orthodox Church remains its sole representative.

The row over church divisions is unfolding against a background of a series of disputes between Moscow and Kiev over gas prices, Ukraine's drive to join NATO and steps to remove Russia's Black Sea Fleet from the Crimea peninsula by 2017.

Yushchenko, brought to power by pro-Western "Orange Revolution" protests in 2004, has long called for a single, independent and fully recognised Ukrainian church as a key part of forming the country's national identity.

"I believe any sort of division among Ukrainian believers will be shortlived. I believe we will achieve our dream," Yushchenko told tens of thousands of clerics, parishioners and officials in the rain outside 11th century St Sofia cathedral.

"I believe that like a gift from God, like historical truth, Ukraine will have a national, independent church."

He turned to Bartholomew, based in Istanbul, and asked him to bless the notion.

In his remarks, Bartholomew referred to the historical difficulties of Orthodoxy in Ukraine, including the "annexation" of both the Ukrainian church and state by Russia under Tsar Peter the Great in the late 17th century.

He suggested he would listen to any proposals for resolving the dispute between clerics in the two ex-Soviet states.

"The mother church not only has the right but the duty to support, within Orthodox tradition, any constructive, reasonable proposal aimed at doing away as quickly as possible with dangerous divisions in the church," Bartholomew said.

But the Orthodox church, formed from the 1054 schism with Rome, gives national churches considerable autonomy and, unlike in Catholicism, Istanbul patriarch has little beyond moral authority to impose solutions on them.

Authorities in Ukraine, site of the Kiev Rus state that preceded modern-day Ukraine and Russia, are hosting the anniversary event.

Alexiy arrived for events, including a Sunday service on the banks of the Dnieper River, after securing an agreement that the independent Kiev-based church would stay away.

Proponents of the independent church have considered placing it under the jurisdiction of Constantinople -- as an Orthodox church in Estonia did in the 1990s -- to win recognition later.

The Moscow church says this would lead to a resumption of the ill-feeling of the 1990s, when disputes over church property sparked street battles, often between elderly believers.