President Yushchenko said he was certain PM Tymoshenko -- his "Orange Revolution" ally turned rival in office -- would run for president in the next election. 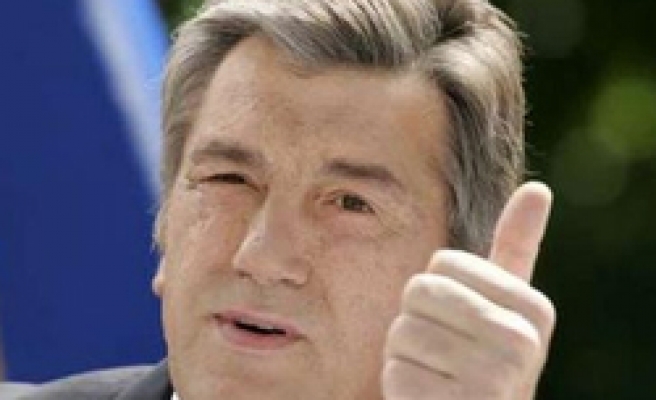 President Viktor Yushchenko said on Thursday he was certain Prime Minister Yulia Tymoshenko -- his "Orange Revolution" ally turned rival in office -- would run for president in the next election.

Yushchenko was brought to power by mass protests that led to his victory in a rerun of a rigged 2004 presidential election.

He named Tymoshenko prime minister, but dismissed her seven months later amid sharp differences. Restored as premier last year after "orange" parties narrowly won a parliamentary poll, the pair have since fallen out again on various issues as politicians turn their attention to the next presidential poll.

"I am absolutely certain, yes," Yushchenko said when asked if he believed the flamboyant prime minister would run.

But the president, his popularity sagging after three years of political turmoil, gave no clear indication whether he would seek a new term in the election, due by January 2010.

"I have little interest in the debate about 2010," he said. "I will make no compromises with anyone. I will not be seeking any favours under the table. I'm not going to sign any deals, private or public."

Addressing a news conference, Yushchenko also said he believed another member of the "orange" team that helped sweep him to office in 2004 had a hand in the dioxin poisoning that left his face disfigured during the last campaign.

Asked whether David Zhvanya, an "orange" politician who turned against him, was involved in his poisoning in 2004, Yushchenko said: "I believe so and that's putting it mildly."

He told reporters he would say no more so as not to compromise an investigation proceeding into his poisoning.

Zhvanya issued a statement accusing the president of "absolute legal nihilism" -- a denial of all reality. He said it was an allegation without proof which "places doubts on his suitability for office" because it undermined the notion of presumption of innocence.

Zhvanya earlier this year said Yushchenko was not poisoned by dioxin, but had merely suffered food poisoning at a dinner hosted by a top security official.

Tests in Austria showed Yushchenko had consumed a large dose of dioxin and he had several operations to counter its effects.

Tymoshenko said earlier this year she would not run in 2010 if the president let her do her job. More recently, she accused him of acting solely to position himself for the 2010 election.

Upheavals have badly dented the ratings of top leaders. Tymoshenko and ex-Prime Minister Viktor Yanukovich, the president's defeated rival in 2004, top surveys with more than 20 percent each. Yushchenko receives no more than 7 percent.