Viktor Yushchenko, the Ukrainian president, has fired the country's prosecutor and accused riot police who rushed to defend him of breaking the law. 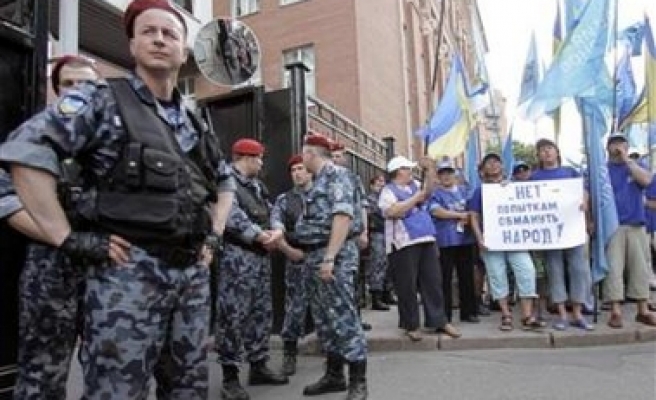 Viktor Yushchenko, the Ukrainian president, has fired the country's prosecutor and accused riot police who rushed to defend him of breaking the law.

They manhandled security guards and allowed Svyatoslav Piskun, the sacked prosecutor general, back into his office.

Yushchenko accused the interior minister, loyal to prime minister Viktor Yanukovitch, of being behind the seizure of the building.

After summoning security ministers, Yushchenko told a news conference: "The question remains of who gave the criminal order and who will assume criminal responsibility for the use of force in resolving political conflicts.

"What [interior] minister Tsushko has done is a crime."

Yanukovich - Yushchenko's rival from the 2004 "Orange Revolution" – accused the president of being dictatorial.

He said Yushchenko had put Ukraine in danger by the groundless dismissal of Svyatoslav Piskun on Thursday.

However, he vowed his government would allow neither anarchy nor civil war.

The president and prime minister have been at odds since Yanukovich, whose lost power to Yushchenko in 2005, made a comeback and became head of government again.

On Wednesday, both men had called for quick action to break a deadlock over the date of the next election.

Yanukovich says no election can be held before the end of September pending parliamentary approval of key legislation. Last Mod: 25 Mayıs 2007, 15:08
Add Comment