Gordon Brown said he wanted to reduce British troop levels in Iraq but he refused to set any timetable for their departure. 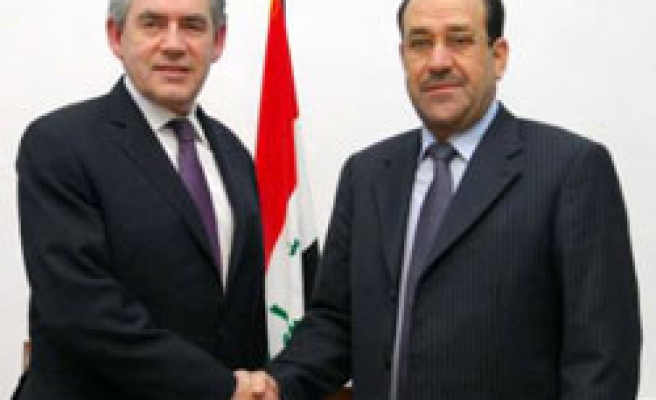 UK Prime Minister Gordon Brown said on Saturday he wanted to reduce British troop levels in Iraq but he refused to set any timetable for their departure.

Making an unannounced visit to Baghdad, Brown was also expected to seek to build on vastly improved security in Iraq to promote investment.

Britain sent 45,000 troops to take part in the 2003 U.S.-led invasion to topple Saddam Hussein, but only some 4,000 remain at an airport near the southern city of Basra where they are training Iraqi security forces.

"It's certainly our intention that we reduce our troop numbers but I'm not going to give an artificial timetable for the moment," Brown told reporters travelling with him after meeting Prime Minister Nuri al-Maliki.

"The tests for us will be how are we meeting the objectives that we've set. What progress can we show?"

Brown's visit coincides with the Iraqi government's growing confidence in its ability to secure the country.

That was reflected in an agreement this week by Maliki and U.S. President George W. Bush to set a "time horizon" for reducing American forces in Iraq.

It was the closest the Bush administration has come to acknowledging the need for a timeframe for U.S. troop cuts. Bush has long opposed deadlines for troop withdrawals.

Brown's government, whose opinion poll ratings have slumped, is expected to make a statement to parliament next Tuesday on Britain's future role in Iraq.

Britain announced last October it planned to cut troop numbers to 2,500 from around April this year, cutting back its involvement in a war that is unpopular with many Britons.

But the government delayed the move after Shi'ite militias fiercely resisted an Iraqi military crackdown in Basra province in late March.

Brown said key objectives that needed to be met for reducing troop numbers included training Iraqi forces, making sure Iraq could push forward with local elections expected this year and also in boosting development in Basra, the country's oil hub.

While it had long been expected, getting the Accordance Front to return after it quit a year ago in a row over power sharing has been seen as vital to healing divisions between majority Shi'ites and minority Sunni Arabs.

Sunni Arabs have little voice in the current cabinet, which is dominated by Shi'ites and ethnic Kurds.

Brown was expected to hail falls in violence in Iraq, particularly in Basra, which was under the control of British troops until they handed over to Iraqi forces last December.

A spokesman for Brown said the prime minister wanted to focus on the "economic element" during his trip and encourage investment in Basra.

The British leader is the latest high-profile official to visit Iraq since violence dropped sharply. Turkish Prime Minister Tayyip Erdogan travelled to Baghdad earlier this month and urged the region to help Iraq rebuild after years of war.

Analysts credit an increase in American troop levels and a more assertive stance by Iraq's security forces for reducing violence in Iraq to four-year lows.

Britain's army chief, Jock Stirrup, indicated on Friday that major troop cuts in Iraq, where 176 British soldiers have been killed since 2003, would have to wait until next year.

The unpopularity of the Iraq war was a factor in Brown's predecessor, Tony Blair, stepping down early in June last year.

Iraq has faded as an election issue in Britain, but Brown's opinion poll ratings have continued to slump, depressed by faltering growth, rising inflation and sliding house prices.