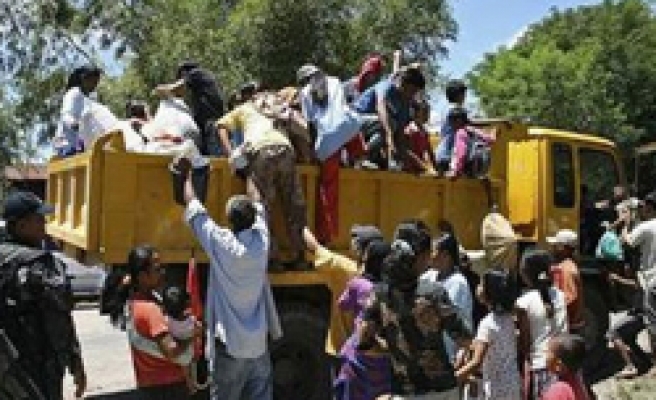 The United Nations said on Wednesday it was concerned about a humanitarian crisis in the southern Philippines where a battle between government forces and Muslim fighters has displaced about 160,000 people.

"The Secretary-General appeals for restraint, protection of all civilians as well as access for the provision of speedy humanitarian assistance to the affected population," the statement read.

An army spokesman said there was a lull in fighting as soldiers enter deserted villages. Their progress is slow because of the threat of landmines.

Most aid agencies have been unable to access the region because of the battle.

"The Red Cross has finally been able to get in. We're preparing to feed 85,000 people for the next five days," Richard Gordon, the head of the Philippines' Red Cross, told Reuters.

"We are the only ones there, other than the government."

While civilian casualties have been low -- currently estimated at 6 -- disaster officials are worried about sanitation, the spread of disease and hunger among the refugees.

Only around 10 percent of the refugees are estimated to be in evacuation centres with the rest either camped outside or staying with relatives.

Gordon said some displaced people might prefer to remain outdoors for fear of airstrikes.

"Some evacuation centres are cramped and they may be fearing that if the centres are bombed they will all be hit."

A territorial deal between the two sides looks set to be declared unconstitutional by the Supreme Court within the next few months.

President Gloria Macapagal Arroyo said this week she would support altering the constitution to turn the Philippines into a federal republic to ensure the creation of a homeland for Muslims in the south.

But her opponents say amending the constitution would allow Arroyo to stay in power beyond her final presidential term, which ends in mid-2010, and continue to give her immunity from prosecution over long-running corruption allegations.

Arroyo has denied that she wants to stay in power beyond 2010 but revival of proposed charter change, or "cha cha" as it is known locally, dominated the local media on Wednesday, overshadowing the plight of the refugees.

"We can't believe the news that we are talking about federalism again," said Gordon. "There are other more important things happening right now."