A build-up of troops and heavy artillery on both sides of the border has worried neighboring countries and the United Nations, which Cambodia has appealed to for help. 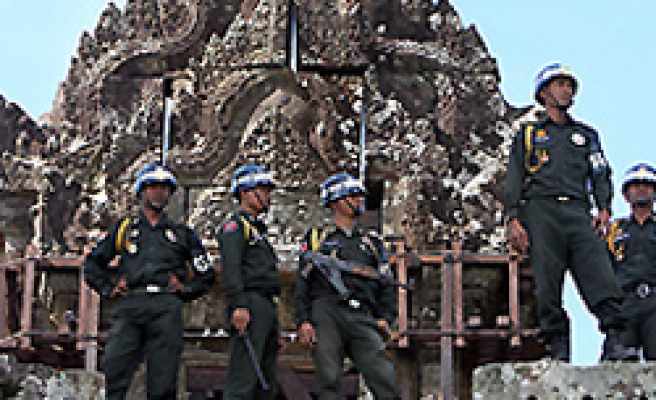 The U.N. Security Council will hold a special meeting on a border dispute between Cambodia and Thailand that has sparked fears of a military clash, diplomats said on Wednesday.

Several council diplomats said the meeting would most likely be held next week. Its format has yet to be determined and it was unclear what exactly the council could do.

"Perhaps we could urge the two sides to work out their differences amicably," one Western diplomat told Reuters.

The U.N. Security Council is the world's top body for issues related to international peace and security.

On Tuesday foreign ministers from the Association of South East Asian Nations (ASEAN) meeting in Singapore failed to reach a consensus on whether ASEAN should get involved.

At the heart of the dispute is a 4.6 sq km (1.8 sq mile) area around the Preah Vihear temple on a jungle-clad escarpment on the Thai-Cambodian border, which forms a natural boundary and is claimed by both nations.

A build-up of troops and heavy artillery on both sides of the border has worried neighboring countries and the United Nations, which Cambodia has appealed to for help.

While there have been no major incidents at the temple so far, Thai border villages that are home to some 4,000 people are braced for a possible conflict.

Analysts say Thai politics bear much of the blame for the dispute over the temple, which an international court awarded to Cambodia in 1962. The ruling still rankles with many Thais.

Preah Vihear's listing as a World Heritage site this month inspired pride and joy in Cambodia, but triggered political uproar in Thailand.

Bangkok's initial support for the heritage listing has been used by anti-government groups to stoke nationalist passions in Thailand and fuel street protests against Thai Prime Minister Samak Sundaravej.