United Nations secretary general Ban Ki-moon gave his full backing to the Alliance of Civilisations initiative to strengthen dialogue between the Muslim world and the West and combat terrrorism through peaceful means. 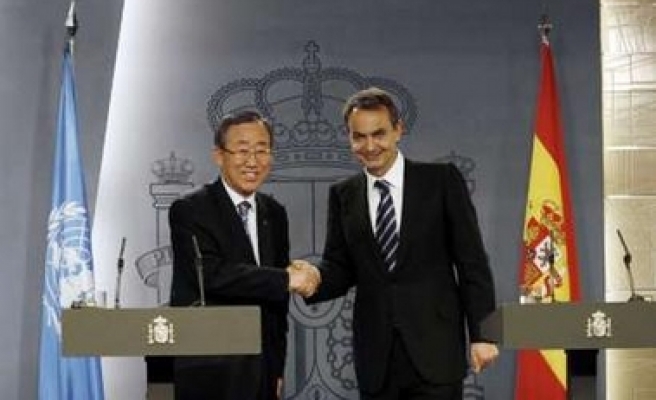 United Nations secretary general Ban Ki-moon on Wednesday gave his full backing to the Alliance of Civilisations initiative to strengthen dialogue between the Muslim world and the West and combat terrrorism through peaceful means.

The UN sponsored initiative is co-chaired by Spain's prime minister Jose Luis Rodriguez Zapatero and Turkish prime minister Recep Tayyip Erdogan. "I am confident this initiative will benefit the entire international community," said Ban. He was on a two-day visit to Spain that began on Tuesday with a dinner with King Juan Carlos and Queen Sofia.

Helping different communities and cultures to dialogue is one of the positive effects that developing the Alliance could have, Ban added. The first meeting to examine an "action plan" will be held in January on the Spanish island of Majorca, Zapatero announced after his meeting on Wedesday with Ban. Youth will top the meeting agenda, Zapatero said. He launched the initiative at the UN General Assembly in September 2004 after the deadly Madrid train bombings in March that year which killed 191 people and injured 1,800.

Ban in April appointed former Portuguese president Jorge Sampaio to head the Alliance of Civilisations. Zapatero said Sampaio will next week present his first "action plan" for the initiative, which will include a series of proposed measures for governments, international and civil society organisations.

Zapatero thanked Ban for his "inestimable support" for the Alliance of Civilisations, which some 50 countries, international and civil society organisations have now backed. Ban and Zapatero also discussed the conflict in Lebanon, Afghanistan, the war-torn Sudanese province of Darfur and the contested territory of Western Sahara, which has been occupied by Morocco since 1975.