A poll found an overwhelming majority of the Turkish public (71.6 percent) does not want the court to close the AK Party. 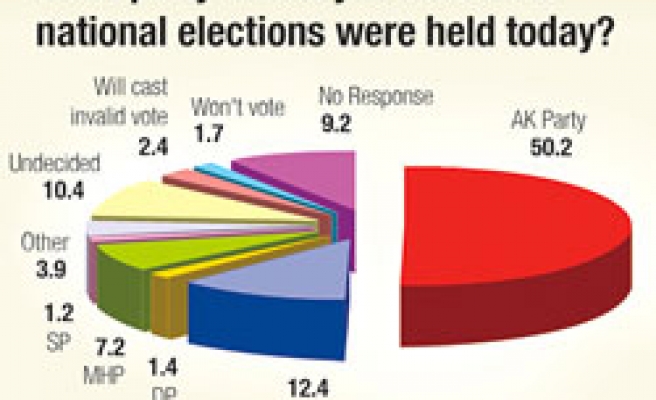 Turks are uneasy and unhappy at their country's prospects against the backdrop of a case filed by Supreme Court of Appeals Chief Prosecutor Abdurrahman Yalçınkaya to close down the ruling Justice and Development Party (AK Party), a new opinion poll has revealed.

The poll, conducted by the Ankara-based MetroPOLL Strategic & Social Research Center, found an overwhelming majority of the Turkish public (71.6 percent) does not want the court to close the AK Party. Among those polled 68.4 percent viewed the case negatively, while only 27.4 percent saw it as a positive development.

Respondents were also asked about their faith in the high judiciary and expectations of the Constitutional Court's decision. Almost 50 percent of those polled said their confidence in the high judiciary had eroded because of the case, whereas 24.1 percent said their confidence level had increased; 18.4 percent saw no change in their attitude. According to poll results, a majority sees the case as "political" rather than "legal" -- 56.2 percent responded that the case was purely political, while 12.6 percent said it was both political and legal. Only 21.7 percent agreed that the case was based solely on legal grounds.

The MetroPOLL public opinion survey found that 65 percent of Turks see the AK Party as no threat to Turkey's secular regime, while 28.2 percent disagree.

The survey also probed respondents about when a party should be closed down. Of 1,204 people polled, 37.5 percent expressed dissent against closing a party by court decision, while 35.1 percent said "resorting or encouraging violence" should be a necessary criterion in adjudicating the case in court. The mere 22.8 percent remaining considered "speeches and actions that conflict with the law" enough to close the party down. The poll concludes that 48.2 percent of the public believes the pending case at the Constitutional Court was filed due to the speeches and actions of the AK Party's top management. A nearly equal number of people do not share this view.

When asked about their expectations of the Constitutional Court, 40 percent of those canvassed said they expected the AK party to be closed down; an equal number of people said the opposite. The poll results point to another sign of eroding public trust in the judicial system -- 34.4 percent drew a connection between the closure case and Ergenekon, the code name for an official investigation into a neo-nationalist gang believed to be the extension of a clandestine network of groups with members in the armed forces and bureaucracy; 43.4 percent did not agree with this premise.

The Turkish public also seems to be strongly against the inclusion of President Abdullah Gül in the chief prosecutor's indictment. About 60 percent thinks the case is illegal. According to the Turkish Constitution, the president is only subject to the Constitutional Court in the case of crimes such as high treason. A little over 50 percent favor a referendum to amend the Constitution, making party closure very difficult; 40.5 percent indicated they would vote against such a change in a referendum.

Pollsters also questioned the public about their voting behavior. If an election were held on the day pollsters made their calls, the AK Party would have led the vote count with a whopping 50.2 percent, higher than in the last election, where the AK Party won 47 percent of vote in a landslide victory. On the other hand, the Republican People's Party (CHP) would have received 12.4 of percent of votes cast and the Nationalist Movement Party (MHP) would have garnered 7.2 percent. These figures are especially alarming for the MHP, as this indicates the party would be out of Parliament, failing to reach the 10 percent threshold.

When asked the identity of their favorite politicians, an enormous 37.3 percent said Prime Minister Recep Tayyip Erdoğan. Gül followed Erdoğan's lead with 12 percent and CHP Chairman Deniz Baykal was favored with 4.1 percent, while only 3.3 percent named MHP Chairman Devlet Bahçeli as their pick.

MetroPOLL conducted the telephone survey from April 5-8 with the participation of 1,204 randomly selected people in 26 provinces. The poll has a sampling error of +-2.8 percent.