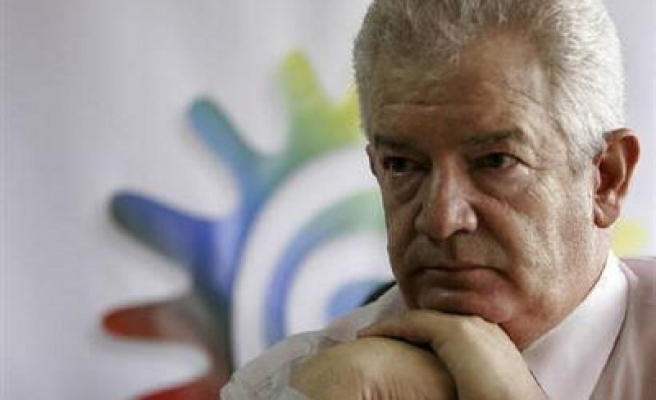 The investigation of Mario Uribe, a longtime senator and presidential confidant, is expected to fuel concerns among U.S. Democrats who oppose a Colombian trade pact because of human rights abuses and lingering influence of ex-paramilitaries.

Jostling with screaming protesters, police spirited Mario Uribe away from the Costa Rican Embassy, where the former lawmaker had earlier sought political asylum after the attorney general's office ordered him arrested on charges he conspired with militia commanders.

The arrest edges the "para political" scandal closer to President Uribe as he fends off concerns about congressional stability with more than 60 lawmakers under investigation and half of those behind bars for suspected paramilitary links.

"The arrest warrant for Sen. Mario Uribe hurts me, but it is a pain I will accept with patriotism and without avoiding the fulfillment of my responsibilities," the president said in a brief statement before his cousin's arrest.

The ex-senator had earlier asked for political asylum in the embassy, but San Jose rejected the petition as "inappropriate" because he had an outstanding warrant.

Alvaro Uribe, a close U.S. partner, has reduced violence from Colombia's four-decades-long conflict by driving back rebels and negotiating the surrender of illegal paramilitaries who massacred peasants and dealt in cocaine in the name of counter-insurgency.

Foreign investment is growing and the economy booming. But the president has struggled recently to convince U.S. Democrats to back a free trade deal as U.S. lawmakers and rights groups worry over paramilitary violence and trade union murders.

A second cousin to the president and a former congressional leader, Mario Uribe was ordered detained after testimony from paramilitary warlords that he asked them to back his senate campaign and help him secure cheap farmland.

The former lawmaker has previously denied any wrongdoing.

Accused of deals with militias

Alvaro Uribe, who has received billions in U.S. aid to fight against Latin America's oldest insurgency, says the investigations show Colombia's institutions are working. But he clashed with the Supreme Court over its probes.

"This will have an impact," said Rafael Nieto, a former deputy justice minister who is now a political analyst. "For one he is the president's relative and secondly he was for years a partner in Uribe's political fight."

Carrying banners and a fake coffin, victims of paramilitary violence rallied earlier outside the embassy to demand that Mario Uribe face justice for the charges he collaborated with warlords accused of atrocities in the darker days of the conflict.

Mario Uribe stepped down from the Senate last October to protect himself from questions from the Supreme Court, which investigates public officials. But the attorney general has kept up its probe into his ties with militia warlords.

The attorney general's office said Uribe was under investigation for meeting with paramilitary commander Salvatore Mancuso before the elections of March 10, 2002, and with Jairo Castillo Peralta, alias 'Pitirri,' in November 1998.

Paramilitary organizations were originally formed by wealthy land owners to counter rebels in areas where state security presence was weak. But their influence soon mushroomed as they took control of large swaths of the Andean country.

Paramilitary commanders disbanded their armies under a deal with Uribe's government, which allowed them short jail terms for promising to confess their crimes and compensate victims. But rights groups and some U.S. lawmakers worry the former commanders have kept their criminal networks alive.