US and Germany unite to condemn defiant Russia

US President George W. Bush accused Russia on Friday of "bullying" Georgia and key European ally Germany criticized Moscow for going too far with its invasion of its small Caucasus neighbor. 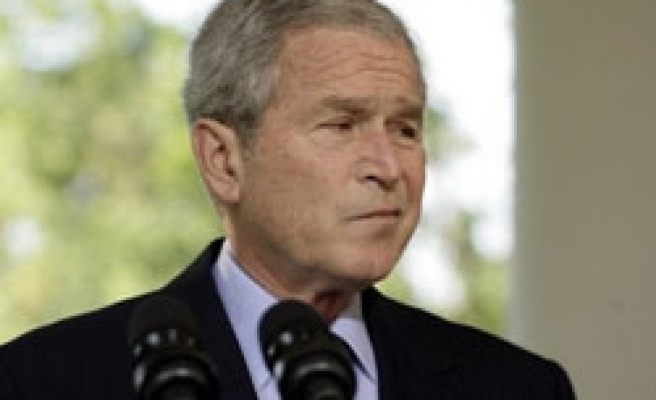 A defiant Russian President Dmitry Medvedev said Moscow would respond the same way if its peacekeepers were attacked again and questioned whether the rebel regions at the center of the conflict could ever live again under Georgian rule. In moves which underlined Moscow's diplomatic isolation over its week-old military push, Poland signed a deal with Washington to install an anti-missile system and US Secretary of State Condoleezza Rice arrived in Georgia in a show of support.
Medvedev said the Polish-US deal was a threat to Russia.

"This decision clearly demonstrates everything we have said recently," he told reporters after meeting German Chancellor Angela Merkel in the Black Sea resort of Sochi. The deployment of new anti-missile forces has as its aim the Russian Federation.

"But Bush said Moscow's decision to send in troops had hurt its credibility overseas. Bullying and intimidation are not acceptable ways to conduct foreign policy in the 21st century," he said in Washington before departing for a holiday in Texas.

Merkel said after meeting Medvedev that Russia's response had been excessive. She called on the Kremlin to pull its forces out of central Georgia and implement a French-led peace plan.

"We very much want the six-point plan to be implemented very promptly so that Russian troops are no longer in Georgia, outside Abkahzia and South Ossetia," she told a news conference.

Moscow mounted its biggest show of military force outside its borders since the 1991 collapse of the Soviet Union after Georgia last Thursday tried to seize back control of the rebel province of South Ossetia, sending an army of troops and tanks deep into Georgia.

The conflict has rattled oil markets because a key pipeline runs through Georgia and has unnerved the West, which fears the conflict could easily escalate in the volatile region.

Secretary of State Condoleezza Rice arrived in Georgia on Friday to show Washington's support for its embattled ally and to secure the peace deal to withdraw occupying Russian forces. "...we'll try to get this formal ceasefire in place because the goal of this is to get a ceasefire and to get Russian forces to withdraw from the country ASAP (as soon as possible)," Rice told reporters on her plane.

Pressure from Berlin is significant because Moscow generally regards it as more sympathetic than former Cold War foes London and Washington.

Georgia has yet to formally place its signature the deal, and President Mikhail Saakashvili appeared uncertain about it ahead of Rice's arrival.

Even Russia's normally reliable allies in parts of the former Soviet Union have remained mostly silent on the issue.

Russia says its actions are fully justified by Georgia's "aggression" and "genocide" in attacking South Ossetia last week, where many of the population hold Russian passports.

It maintains its troops must stay on the ground in Georgia to secure the situation and prevent further conflict. Russian ground forces are mainly based around the central town of Gori, 70 km (40 miles) west of the Georgian capital.

The two sides traded accusations on Friday of misconduct in the war zone. Georgia quoted a US human rights group alleging that Russia had used cluster bombs against civilians -- a charge denied by Russia -- while Moscow accused Tbilisi's troops of planting mines in civilian areas as they retreated.

In Moscow, the General Staff said at its daily news briefing that there had been no shooting in the past 24 hours.

The United Nations has expressed alarm at lawlessness in war-torn areas. Witnesses in the area have seen Ossetian militiamen attacking villages and stealing cars.

Refugees tell of a lawless zone in the villages running north from Gori to Tskhinvali, the devastated capital of South Ossetia that fell to Russian forces after heavy fighting.

"Many people have been burned alive in their homes," said an old Georgian woman in Gori, pulling a trolley piled with bags.

Russian soldiers near Gori -- some lounging in the midday sun, others manning tanks and armored personnel carriers -- looked bored on Friday as they denied reports of looting.

"We're the regular army," said Vita, wiping sweat from his brow with the sleeve of his camouflage uniform. "There's no violence, no looting," he said. "All is quiet."