US apologizes for 'insulting' Berlusconi biography

When Bush travels abroad, the White House typically distributes to reporters a press kit with the president's schedule, details of places he will visit, transcripts of remarks and biographies of officials he plans to meet. 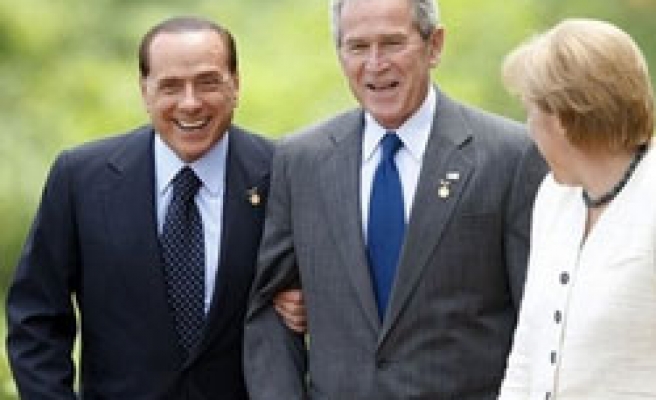 The United States formally apologised to Italian Prime Minister Silvio Berlusconi on Tuesday for distributing to reporters an "insulting" biography of him that said he was "hated by many".

The description was included in a thick press kit distributed to reporters traveling with U.S. President George W. Bush from Washington to the Group of Eight summit in Japan that Berlusconi was also attending.

The four-page biography, pulled from the Encyclopedia of World Biography Supplement, refers to Berlusconi as "hated by many but respected by all at least for his bella figura (personal style) and the sheer force of his will".

Berlusconi was said to be "regarded by many as a political dilettante who gained his high office only through use of his considerable influence on the national media..."

It also said Berlusconi was "one of the most controversial leaders in the history of a country known for governmental corruption and vice".

When Bush travels abroad, the White House typically distributes to reporters a press kit with the president's schedule, details of places he will visit, transcripts of remarks and biographies of officials he plans to meet.

"The sentiments expressed in the biography do not represent the views of President Bush, the American government, or the American people," he said. "We apologize to Italy and to the prime minister for this very unfortunate mistake."

Bush, during a visit with Berlusconi in Rome last month, described them as "good friends". The two have been so friendly that Bush treated Berlusconi to a visit to his Texas ranch in 2003, a rare privilege granted to only a few leaders.

Berlusconi was a key backer for the U.S.-led occupation in Iraq.

The two leaders did not have a formal bilateral meeting during the G8 summit.