US Benchmarks for Israel, Palestinians

The Bush administration has drawn up an eight-month timetable for both Israel and the Palestinians to complete benchmarks meant to prepare for final-status negotiations. 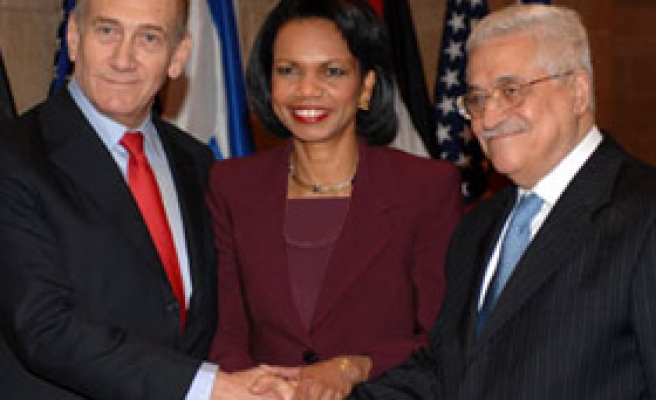 The Bush administration has drawn up an eight-month timetable for both Israel and the Palestinians to complete benchmarks meant to prepare for final-status negotiations.

"Both sides agreed to benchmarks," a senior US official involved in the discussions told Reuters on Wednesday, May 2.

"The benchmarks give everyone an incentive. One side gets security. The other side gets greater (freedom) of movement."

The first-ever US timeline includes specific dates for the Israeli and Palestinian leaders to complete certain steps.

It sets a specific date for Israel to allow Palestinian bus and truck convoys travel between the Gaza Strip and the occupied West Bank.

Israel agreed to the convoys under a November 2005 agreement brokered by US Secretary of State Condoleezza Rice but changed hearts after Hamas was voted to power in March of last year.

The timeline, to be implemented between mid-May and the end of December, envisages definite dates for Israel to remove roadblocks in the occupied West Bank and extend operational hours at Gaza border crossings.

It defines specific dates for Palestinian President Mahmoud Abbas to increase troop deployments in Gaza and the West Bank and to take specific measures to curb rocket firing into Israel.

"The purpose is to create a clear basis on which to help track these particular issues," said another US official.

"Some of these (steps) are difficult," acknowledged Palestinian presidential aide Saeb Erekat.

"But it's the right approach."

The list of benchmarks was presented to Israeli and Palestinian leaders last week.

Details of the list have not been publicly disclosed.

Israel has so far refused to discuss final status issues with the Palestinians.

Diplomats said that Rice hoped to draw up a blueprint, or "rubric", that both sides would commit to, possibly in writing.

But it is not yet clear how hard the Bush administration is prepared to push the parties to complete the benchmarks. Last Mod: 02 Mayıs 2007, 17:46
Add Comment