Bush administration officials have said they expect a significant announcement on investment coming out of this week's talks, which will also focus on currency, energy issues and the struggling Doha round of world trade talks. 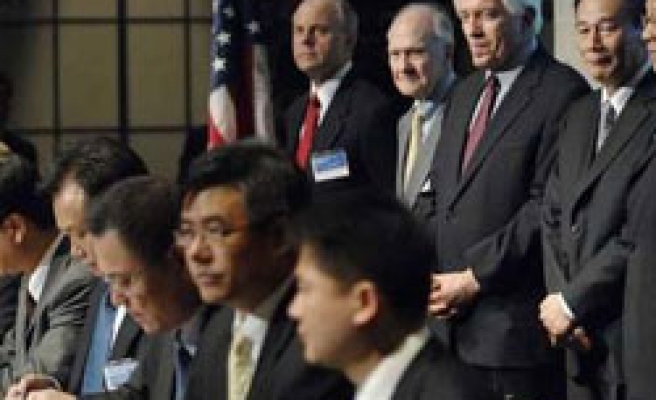 U.S. and Chinese companies signed 35 business deals in sectors ranging from automobiles to telecommunications on the eve of high-level trade and investment talks between the two countries.

The value of the contracts and investment agreements was more than $8.3 billion, the Chinese Commerce Ministry said in a statement at a U.S. Chamber of Commerce signing ceremony.

Meanwhile, the United Soybean Board said eight U.S. soybean exporters signed contracts on Monday in St. Louis to sell more than $4.5 billion worth of U.S. soybeans to China, which is already the United States' biggest soybean customer.

"In traveling through the United States, we have seen a lot of flooding, which makes us worry about this year's crop," Wu Yuquei, vice-general manager of the Jilian Grain Group Import and Export Co. said in a statement.

"These contracts comfort us by ensuring that we will have a reliable supply of U.S. soybeans in the fall," Wu said. The contracts signed on Monday apply to the 2008-09 soybean marketing year, the soybean board said.

General Motors signed a framework pact for "the sale and export of approximately $1 billion worth of vehicles, components, machinery and equipment to our flagship joint venture in China," GM Vice President Ken Cole said at the Washington ceremony.

The company, which last year became the first global automaker to sell more than 1 million vehicles in China, also plans to invest an average of $1 billion annually in China through 2010, Cole said.

Ford said it signed a deal worth more than $800 million that includes sales of more than 30,000 North American-built autos to China starting in 2009. Ford also will begin supplying transmission components and parts this year to its passenger car joint venture in China, the company said.

"China's level of economic development and economic structure are very different from those of the United States and complement them very much, so China-U.S. trade and investment are complementary and mutually beneficial," China's Commerce Minister Chen Deming said.

Alcetal-Lucent, Motorola, IBM, Oracle, Sun Microsystems and Cisco Communications all signed deals with China Mobile Communications Corp, according to a list of transactions that excluded details on the size of individuals deals.

Chrysler, IAE International Aero Engines, Texas Instruments Hewlett-Packard and about a dozen or so other U.S. companies also inked deals in Washington on Monday.

Chinese officials, heading a trade mission comprised of 120 companies, plan to visit 14 cities in 11 U.S. states. They will sign more than 70 deals valued at over $13.6 billion to buy U.S. goods and to invest in the United States.

The signing ceremony set the stage for high-level trade and economic talks beginning on Tuesday at the U.S. Naval Academy in Annapolis, Maryland, where the two sides could agree to begin bilateral investment talks.

U.S. business groups have been eager for the United States to negotiate investment pacts with Brazil, Russia, India and China, a fast-growing group of countries known collectively as the BRIC economies.

A treaty would create a forum to resolve investment disputes between the two countries and, depending on the scope of the negotiations, could also tear down a number of investment barriers on both sides, said Myron Brilliant, vice president for Asia at the U.S. Chamber of Commerce.

Bush administration officials have said they expect a significant announcement on investment coming out of this week's talks, which will also focus on currency, energy issues and the struggling Doha round of world trade talks.

In an interview on Friday, a senior Bush administration economic official argued very few Chinese investments in the United States pose any threat to national security.

"If they want to come and invest in America and create good-paying jobs, that's something we want them to know we welcome," the official said, speaking about this week's talks on the condition he not be identified.

To drive home that point, the U.S. Treasury Department is holding a one-day seminar on Monday to encourage more Chinese investment, he said.

"We have a lot more investment in the United States from Japan, Korea and Southeast Asian nations than we do from China. That's not because we're closed to investment. The Chinese always cite CNOOC (the oil deal), but that's only one case," he said.