American conservatives and Republican White House hopeful cheered a watershed verdict upholding a ban on late-term abortion as the first step to an outright ban, while abortion proponents and Democrats seethed with anger. 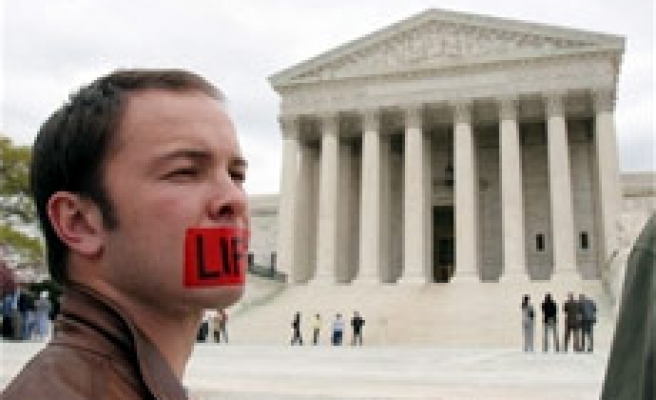 For today, we have a significant victory for life and it is to be celebrated," Tony Perkins, President of the Family Research Council, an influential conservative lobby group with strong evangelical ties, told Reuters on Thursday, April 19.

The bellwether ruling said that the Partial-Birth Abortion Ban Act that President George Bush signed into law in 2003 does not violate women constitutional rights.

The law makes it a crime for a doctor to perform an abortion when the "entire fetal head" or "any" part of the fetal trunk past the navel is outside the woman's uterus.

"The partial-birth abortion ban, which an overwhelming bipartisan majority in Congress passed and I signed into law, represents a commitment to building a culture of life in America," Bush said.

"Years of efforts to outlaw the abhorrent procedure reflect the compassion and humanity of America."

The controversial procedure takes place after the fifth month of pregnancy.

It involves pulling the live fetus feet-first through the mother's partially dilated cervix and puncturing its skull to allow it to pass.

The ruling immediately make its way into the 2008 presidential election.

"This decision is a powerful and timely reminder of the enormous significance of presidential elections and their pivotal impact on the makeup of the Supreme Court," Richard Land, president of the Ethics and Religious Liberty Commission, told the New York Times Thursday.

"The time is now right to launch aggressive legal challenges across America to abortion on demand," said Troy Newmann, of the Operation Rescue.

"It is encouraging but we also know that these struggles go back and forth," she said.

"It is not the end of the story.

"I would rank this as a major victory as far as limiting abortion in this country but how far this court will go toward banning abortion we don't know."

Republican White House hopefuls were quick to invest the ruling to court conservatives opposed to abortion.

"This decision represents a step forward in protecting the weakest and most innocent among us," agreed former Massachusetts governor Mitt Romney, who once supported abortion rights.

Sen. John McCain, who voted for the ban in 2003, called the verdict "a victory for those who cherish the sanctity of life and integrity of the judiciary."


"The door is now open for politicians ...to interfere even more in our personal decisions," Keenan said.
But abortion right proponents and Democrats, including presidential candidates, were alarmed.

"For the first time since Roe, the Court blesses a prohibition with no exception safeguarding a woman's health," she wrote.

Abortion rights advocates underscored the stakes of the 2008 presidential election, arguing that the next president will almost certainly appoint a justice who could shift the balance of the court.

The leading Democratic presidential contenders weighed in, denouncing the decision as a threat to women's health.

Senator Hillary Rodham Clinton also described the decision as "a dramatic departure from four decades of Supreme Court rulings that upheld a woman’s right to choose and recognized the importance of women’s health."