'US could start new Cold War'

Gorbachev says US is mounting an imperialist conspiracy against Russia that could push the world into a new Cold War. 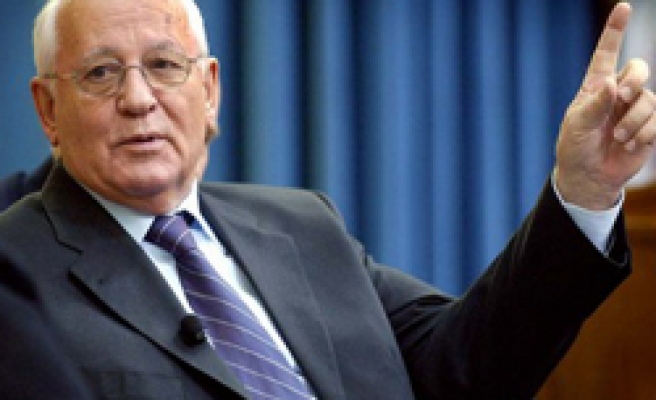 With Dmitry Medvedev due to be inaugurated today as Russian president, the Soviet Union's last leader said that the White House's claims of peaceful intentions towards its former superpower rival could no longer be trusted.

Delivering one of his most scathing attacks on the US, Mr Gorbachev told The Daily Telegraph that a US military build-up was under way to contain a resurgent Russia.

From Nato's expansion plans in the former Soviet Union to Washington's proposals for a bigger defence budget and a missile shield in central Europe, the US was deliberately quashing hopes for permanent peace with Russia, Mr Gorbachev said.

"We had 10 years after the Cold War to build a new world order and yet we squandered them," he said.

"Every US president has to have a war."

The 1990 Nobel Peace Prize winner's denunciation of the US mirrors the most belligerently anti-Western speeches of Vladimir Putin – who is said to consult Mr Gorbachev on foreign policy matters.

Mr Putin may be switching jobs to become prime minister, but many expect him to remain the most powerful figure in Russian politics.

Mr Gorbachev hinted that the former KGB spy could still direct Russia's foreign policy, leaving President Medvedev – seen by some as more liberal than his mentor – to concentrate on internal matters.

Yet if Washington blames Mr Putin's self-aggrandising rhetoric for the worst crisis in East-West relations since the Cold War, for Mr Gorbachev the blame lies entirely with the administration of President George W Bush.

"The problem is not with Russia," he said, speaking at a friend's château outside Paris.

"Russia does not have enemies and Putin is not going to start a war against the United States or any other country for that matter.

"Yet we see the United States approving a military budget and the defence secretary pledging to strengthen conventional forces because of the possibility of a war with China or Russia.

"I sometimes have a feeling that the United States is going to wage war against the entire world."

Last year, Robert Gates, the US defence secretary, told a congressional committee that America needed to boost military spending to counter myriad threats including the "uncertain paths of China and Russia".

Those comments caused uproar in Russia, with pro-Kremlin newspapers claiming they heralded the start of a new Cold War.

Tensions have already been heightened by a US proposal to build a missile defence shield in Poland and the Czech Republic to counter a nuclear strike by Iran.

Mr Gorbachev, however, claimed the plans were an aggressive act against Russia.

"Erecting elements of missile defence is taking the arms race to the next level," he said. "It is a very dangerous step."

Relations have further deteriorated after Nato promised eventual membership to Georgia and Ukraine, a move interpreted by Mr Gorbachev as an attempt to extend America's sphere of influence into Russia's backyard.

"The Americans promised that Nato wouldn't move beyond the boundaries of Germany after the Cold War but now half of central and eastern Europe are members, so what happened to their promises? It shows they cannot be trusted."

For a man hailed as one of the heroes of the 20th century, Mr Gorbachev, now 77, often sounded like the ageing hardliners he struggled against in the Kremlin during the 1980s.

He railed against a "military-industrial complex" that he insisted was the "real government" of the US and, quoting a Russian documentary on state television, suggested that Margaret Thatcher had supplied weapons to Chechen terrorists.

Still, while Mr Gorbachev may be delighted by the rebirth of what many see as Russian imperialism, many wonder whether he approves of the way in which Mr Putin has eroded freedom of expression to such an extent that some claim glasnost is dead.

"I do not think that glasnost is dead in Russia," he said.

"There is a phenomenon in the West to criticise Putin's domestic record. But in Russia he has mass support. His popularity ratings are 70 to 80 percent.

"Is this not democracy?"